So representatives of the human race have done it again. They have caused harm and death to yet more of Mother Earth’s inhabitants with which we share the planet. This time the victims include nearly half the world’s population of the northern rockhopper penguin, which also happens to be one of the world’s most threatened species of penguin. Not for the first time, and I am sure not for the last time, the incident occurred at sea. On this occasion, a cargo vessel has been wrecked on Nightingale Island, which is part of the Tristan da Cunha UK overseas territory in the South Atlantic. Not only has this incident threatened the life of the penguins, it also threatens to create another environmental disaster for the wildlife of the island; Nightingale Island is one of two large islands in the Tristan da Cunha group that is rodent-free. If the vessel carries rats and they gain a foothold on the island, their impact would be devastating, placing the island’s internationally important seabird colonies in jeopardy. However, the Tristan da Cunha Conservation Department have placed baited rodent traps on the shore in the vicinity of Spinner’s Point, which is the headland on the northwest of the island where the wreck is grounded, in the hope that they can intercept any rats that did get ashore. 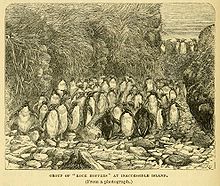 Northern Rockhopper Penguins on Inaccessible Island, drawn by the naturalist aboard HMS Challenger

Nightingale Island is surrounded by oil which extends to a slick up to 8 miles offshore from the wreck of the MS Oliva, which was carrying 1,500 tonnes of fuel oil. Inevitably hundreds of oiled penguins have already been coming ashore. Not only are they affected, but also the economical important rock lobster fishery. And as the vessel was also fully laden with 60,000 tonnes of whole raw soya beans there is also the concern of how the impact of this spilt cargo will have on the fragile local marine environment.

RSPB research biologist Richard Cuthbert said: "How a modern and fully laden cargo vessel can sail straight into an island beggars belief. The consequences of this wreck could be potentially disastrous for wildlife and the fishery-based economy of these remote islands. The Tristan da Cunha islands, especially Nightingale and adjacent Middle Island, hold millions of nesting seabirds as well as 40% of the world population of the globally endangered Northern Rockhopper Penguin. Over 200,000 penguins are currently on the islands and these birds will be heavily impacted by leaking oil."

Yes, how did such a vessel manage to do that?

Tristan da Cunha is not the easiest place to get to and from. There is no airport and all 3 scheduled ships depart from Cape Town. They are scheduled to make 9 return trips each year and it would seem that two of them (which only carry 12 passengers apiece) are fully booked for 2011 sailings. The third is operated by the South African Government as part of a contract to lease Gough Island as a Meteorological Station. It has space for 30 passengers but only calls in September as the Gough Island relief service. So, it is not sure as to how long the Greek Captain and the 21 Filipino crew will be in the Tristan da Cunha settlement (Edinburgh of the Seven Seas), but they are all receiving the warm hospitality of the islanders.

Meanwhile the remarkable rescue is continuing. Oiled penguins are being collected from the islands of Nightingale, Inaccessible and Middle with the aim of transporting them all to the main Tristan island. But there are not enough supplies of specialist cleaning fluids and a vessel with all necessary supplies is scheduled to leave Cape Town in the next few days. Unfortunately, it will be too late for at least two sub-Antarctic fur seals that were found dead on Middle Island, and two Inaccessible rails that were found dead in the tussock grass near the shore of the island they are named after. The Inaccessible rail is the smallest flightless bird in the world and is endemic to that island.

Tristan da Cunha one of the remotest places in the world and more can be read about it, this incident and the efforts of the islanders to help the stricken penguins at: http://www.tristandc.com/newsmsolivatristan.php

And just to emphasise exactly how remote, here are some distances - as the crow flies - posted on the Tristan da Cunha website: 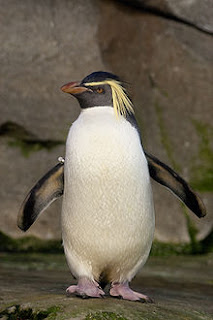