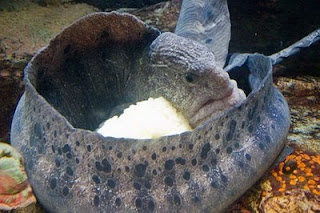 The Birch Aquarium at Scripps Institution of Oceanography in La Jolla, California announced in late March that aquarists there had been helping around 250 baby wolf eels to hatch from a mass of eggs, with another couple of hundred due to hatch over the following couple of weeks. Found in the northern Pacific Ocean, wolf eels (Anarrhichthys ocellatus) are not actually eels at all but fish (scientists refer to them as 'wolf-fish') and despite their rather aggressive look, they are quite friendly unless, of course, you happen to be a sea urchin at dinner time. They are rarely aggressive, but it may be wise to note that they are capable of giving a painful bite if they so desire.
Posted by Corinna at 14:14