Up the ladder to the roof

Jon has gone – and before that incomplete piece of information gets bandied about and embellished on the crypto bush telegraph – I had better add swiftly that he is, of course, up in Staffordshire with Dave B-P and staying the evening chez Shosh and Gav - so tis only for one night.


Things are oddly quiet here. There is no music bellowing forth from Jon’s inner sanctum and no garbled messages on the intercom which take some translating at the best of times due to the background interference of whistling, crackling and humming. Even Biggles cannot quite make out where he has gone – I think he thought that Jon was hiding in bed, because when Biggles followed me, and the large pile of dry laundry upstairs, he headed straight for Jon’s side of the bed with an expectant look on his face. Or perhaps he was just eyeing up the available space for bedtime tonight – I am sure he will take full advantage of the room to stretch out in.

However, Biggles did have a visit today - Gerald Smith brought his dog Ben to visit and they had a romp in the garden (Ben and Biggles that is). Well, not really a romp as Ben tends to ignore Biggles in favour of his ball and Biggles looks on in a manner of “what am I supposed to do now?” After the obligatory doggy welcomes of sniffing and tail-wagging it was off to play with their respective toys. Ben brought him a present today too – a Frisbee - which seems to be made of a more tooth-resistant plastic than the others Biggles has in his possession, which are now more than a little worse for wear.

It does actually remind me of when I used to take my girls to mother/toddler afternoons – the look on Biggles’ face is remarkably similar and so are his actions. There is that smidgeon of shyness and awkwardness as he plays with his favourite toys, with the occasional look in the direction of Ben and then me as if to question whether that is what he is supposed to do.

Occasionally there is the quiet, slow and almost surreptitious pinching of Ben’s ball which then gets carried to another part of the garden but not played with. Biggles just lies down with it between his front legs and watches as Ben comes up and reclaims it, just like a child takes a toy away from another and goes to sit with mother with it clutched under their arm, only to place it on the mother’s lap and go off and do something else. It is almost a case of eyeing up the opposition before deciding upon the definitive action.

Yesterday I was busy putting together the ‘New and Rediscovered’ and ‘Watcher of the Skies’ pieces for the next issue of Animals & Men, whilst Graham was ‘up the ladder to the roof’ and Oll was working on the ‘Aquatic Monsters Logbook’ for the aforementioned journal. All in all a busy time has been had by us three whilst Jon and Dave have ambled their way up northwards.

As for today, well at least I don't have to be up as early as they will be - the poor souls have to be up at 7 am!
Posted by Corinna at 11:17 No comments:

Many Happy Returns of the Day
to my dear mother

Love you lots and I hope you have a lovely day
There's nothing like a mama-hug. ~Terri Guillemets
Posted by Corinna at 12:22 No comments:

To a student reading zoology, it is assumed that a certain attraction to all things of the natural world is an obvious attribute. To an orange cat not reading anything, it is assumed that a nice warm lap is an undeniable attraction. Put them both together at the witching hour and one might expect this combination to come together in some kind of mysterious and magickal trip of delight.
But the student is Max and the orange cat in question is our very own Spider McGraw so that dismisses the latter part of the previous paragraph - it was past Max’s bedtime and Spider is just too old to even think about such things. However, Spider did help Max in some work on the laptop, much to Max’s obvious dismay and chagrin.
It had started out so well: 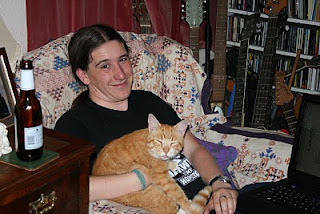 But then Max realised something odd about his laptop, although Spider denied all knowledge of walking over the keyboard to effect such a splendid affect: 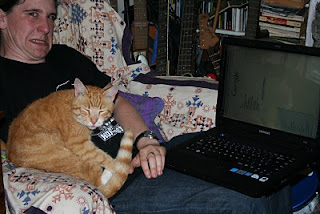 It seemed that Spider had somehow managed to rotate the display on Max's screen by 90 degrees - what a clever cat. He settled down pleased with the result of his assistance.
However, Max was enraged: 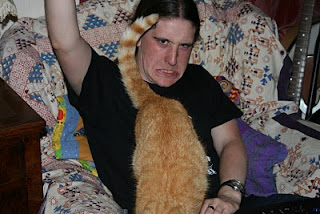 And Spider was so disgruntled at this youthful display of temper that he showed Max exactly how much by displaying what he thought of the tantrum in a very cat-like way: 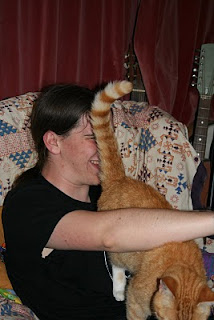 Max was completely speechless at such a show of audacity from Spider: 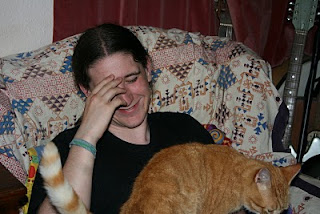 And to avoid such an anatomical display again - that, after all, would only be appreciated by another cat or a vet - Max decided to let the matter drop and they both formed a tentative truce: 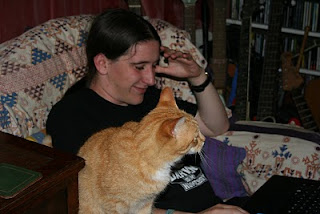 Ah the ups and downs, territorial rights and testosterone levels of the males at the CFZ are always a wonder to behold.
Cheers! A votre sante! Slainte! or even Bottom's Up!
Posted by Corinna at 11:53 No comments:

Bats in the belfry

For many years I have had bats in my belfry....the older I get I swear the bigger they become as they flit erratically inside my head.

On Saturday night (or rather during the early hours of Sunday morning) I was sitting writing some of my book, when something caught my eye at the bottom of the stairs. It seemed to come and go rapidly and was dark in colouration, or so it seemed when seen from the light shining from the dining room on to the bottom of the stairs. My immediate thought was that my imagination was getting the better of me – Biggles had been acting a might peculiar earlier on as if he could hear something going on outside (don’t you just hate it when cats and dogs suddenly raise their head and stare into nothing with ears twitching and eyes intent on something you cannot see, accompanied with a low guttural growl?) . Were my belfry bats crossing up the wires in my head as I looked up from my twilight world of fiction and into the bright light of reality? Nope, I could definitely see – and hear – wings, although not the usual delicate sound of feathers, but something more solid. However, my next thought was that maybe one of the cats had caught a roosting bird and, getting up to investigate, I began to mull over whether I would have to awaken the household to help catch it and put it in one of the specially made holding cages that are always prepared to receive a patient if the call is needed.

I had no idea where any of the cats were at that moment nor where Biggles was, as he had been up and down the stairs continuously for a few hours and I had lost track as to whether he was recumbent on the bed or in the sitting room. However, when I turned on the landing light I realised that the unintentional visitor was in fact not a bird at all, but a bat. And quite a largish size bat at that, not one of the usual smaller ones that we see at dusk flittering around the garden after insects. It must have come in through the landing or bathroom window and was clearly having trouble regaining its freedom. The landing window does not open very far and I did not want to risk making an almighty row at that time in the morning trying to force it to go any further. However, this in turn made it a hopeless task for the bat to negotiate and it kept flying back and forth down the corridor that leads to our bedroom, which – as Jon was asleep – was enveloped in complete darkness and then out passed me on to the stairwell and up into the rafters.

Eventually it veered off into the bathroom and I quickly slipped in behind it, turned on the light to see what I was doing and closed the door. I flung the bathroom window as far as open as it would go – which luckily was a darn sight more than the landing window – and stood stock still while the poor bat zoomed in and out of the shower cubicle, around my ankles and around my head. Then it was gone and hopefully is none the worse for wear after its unfortunate predicament.

I have no idea what species it was; the landing was gloomy and the bat moved with incredible speed and to be perfectly honest I would not have known even if it had sat on my hand and struck a pose. But for my part, bats are - quite simply - gorgeous and fascinating creatures and although having one inside the house is supposed to be a bad omen, I look upon it as a very interesting – and completely unexpected – interlude to the solitude and quietness of the wee small hours.
Posted by Corinna at 23:22 No comments:
Newer Posts Older Posts Home
Subscribe to: Posts (Atom)