I have just been extremely sinful. In a harmless way that is. So I am settling down to write this blog whilst digesting a large dish of golden syrup sponge pudding. I know – bad eh? I had quite forgotten, until the other week, that a quick mix of ingredients can produce a flashback to school puddings in no time at all thanks to the trusty microwave. To sit guiltily spooning the soft, gooey sponge smothered in custard into your mouth is a real trip down memory lane. Such delectation for your taste buds is just what is called for after a long day consisting of filming, followed by some finger exercise on the computer keyboard.

Much of today was spent doing a spot of filming for Jon’s Emily and the Big Cats so it was time for me to morph into a Joyce Grenfell/Margaret Rutherford/dotty ageing hippy chick character but all in the name of art and it is great fun. Poor Biggles got a bit confused I think, as he was a prop of sorts but never quite actually went anywhere poor soul. Sitting in the back seat of a stationary car, salivating at the thought of chewing the sponge windshield on the microphone (I hate to think what reaction will come forth when he sees the big furry one) is not much fun for a go-getter like him and there wasn’t even an on-set burger van to satisfy his never ceasing desire for something to eat. In fact, it is something that Emily and I are demanding before we carry on with any more celluloid shenanigans!

Poppy, my elusive tortoiseshell cat, even got in on the act. She hovered outside the gate as filming was going on but eventually got herself forever immortalised by lurking at the top of the stairs in one scene. Spider, however, slept through the whole affair – he is completely bored with the whole filming business.

The afternoon was definitely slightly different from that of Thursday though. I had spent some of the time after lunch listening to Peter Gabriel’s new album Scratch My Back and his voice, as usual, had left me in a tranquil state of mind. Until that is… BOOM, BANG, CRASH from the office as Jon decided he would listen to a rather odd concoction of musical arrangements – very loudly. As the flowers in the vase on my ‘desk’ began to sway back and forth with the vibration, I began to wonder whether they would lose their petals sooner than nature intended. I could add here that the picture behind me fell off the wall in protest, but that would be exaggerating – just a tad.

I am used to strange sounds escaping the confines of the office, from Country & Western to German opera, but Thursday’s were rather peculiar to say the least. Must have been the Director’s brain getting in gear for the other sort of directing he was to do today.

Bless – I wonder if Mrs. Hitchcock had the same problem?
Posted by Corinna at 22:32 No comments:

For whom the bell tolls

According to several sources the traditional pancake day race originated after a woman in Olney, Buckinghamshire forgot the time and upon hearing the shriving bell dashed out of her house, still wearing her apron and carrying her frying pan. This was back in 1445 and ever since then this particular village hosts one of the most famous pancake races in this country.

Pancake races are held annually throughout the UK, and there are celebrations of various different degrees throughout the world, for this particular notable date in the religious calendar.

It seems though that 2010 could be ringing the funereal toll of the church bells as well as the shriving bell. It appears that yesterday St. Albans City Council Health & Safety deemed it too dangerous to run the annual race and contestants would have to walk it instead. If anyone ran, their team would be disqualified – as indeed some were as they had missed the announcement of the ‘new rule’. Why? Because it had rained. So you cannot run after it has rained now. Does this mean for Health & Safety reasons you can no longer run for the bus if it has been raining? Does this mean you can no longer train for the 400 metres if it has been raining? What a load of bureaucratic poppycock.

One of the contestants in St. Albans summed it up perfectly: Hertfordshire NHS Community Partnership team captain David Emery, 34, whose team was disqualified in the final, said: "This is health and safety gone mad. I have been disqualified from a running race for running."

Are all this country’s traditions that have spanned for centuries going to be gradually faded out due to Health & Safety? Are the fun traditions of our past going to fade into history and be replaced by virtual games of them to be played in the safety of our own homes instead? Are children of the future going to think that the pancake race, for example, was first run by Mario and a few furry weird squeaky creatures?

One does wonder also, whether the annual Parliamentary pancake race contested by parliamentarians and journalists at Westminster – which was held last week - would have been under the same rules if it had rained. But then I suppose they would have cancelled it on their own volition – they wouldn’t want to get their expensive suits grubby now would they?
Posted by Corinna at 13:23 No comments:

Happy Birthday CFZ Newsblog
Well done and thanks, Gavin, for all your dedicated hard work
Posted by Corinna at 20:58 No comments:

My big (ok well not big as in BIG, but big as in older) brother, Ant, and his family live over in Norfolk (Norwich is still my favourite city, but that is beside the point). His youngest daughter, Thea, is in her final year at university studying for a degree in Design. As part of her course she has been doing a placement with a design house in Leeds, and excitingly had a couple of designs accepted by a couple of well-known High Street names, one of which was Monsoon.

Ant sent me the following link to one of her designs:

Pretty excellent achievement if you ask me, so congratulations Thea from your weird aunt, even weirder uncle, and not so weird cousins.

PS: By the way, my sweet little neice, my favourite colour is black, my most desired material is velvet and I am rather partial to a spot of finely woven lace. Size? …. well ask me in private.
Posted by Corinna at 19:14 No comments:

I was doing some research today about the raven and was quite surprised, when typing in Corvus Corax into the search engine, to come across what can only be described as pretty amazing. I completely forgot my delving and became lost somewhere between the art of medieval musicians and the head banging of heavy metal. I didn't know quite where to put myself, but my feet immediately knew what to do and started a jig all of their own underneath the dining room table.

Blimey, now these are someone to see live at some point.

Nothing says Happy Valentine's Day quite like the cards from the Victorian era with their sweet plump Cupids, delicate colours and profusions of flowers. So with my own Valentine in mind here is a small collection of Victoriana. 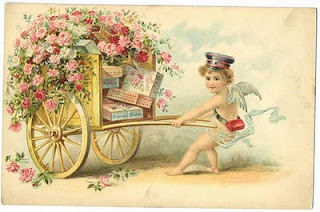 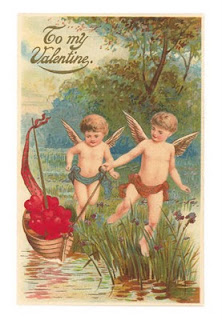 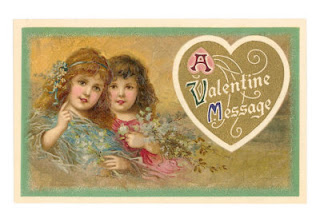 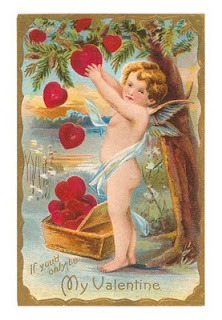 Happy Valentine's Day sweet plump cherub of mine
Posted by Corinna at 12:28 2 comments:

Returning to the subject of climbing hedgehogs

You may remember some time ago that I recounted my strange dream of a family of hedgehogs sitting in a tree. Well yesterday I discovered that this may not have been quite such a peculiar dream after all. According to the Medieval Bestiary, which I have been reading online, the hedgehog was supposed to have been able to climb vines to gather fruit. According to this fascinating collection of writings, the little creatures were able to knock down grapes and would then roll over and collect the fruit on their quills to take back to their young. They were also supposed to be able to detect from which direction the wind was blowing and if a north wind did blow, they would close up the north hole of their lair.

Interesting little creatures and apparently when cooked they were pretty good for medicine too.

Jon just muttered ”Take us the foxes, the little foxes, that spoil the vines: for our vines have tender grapes.” (Song of Solomon 2:15) and wandered off to the office.
Posted by Corinna at 02:14 2 comments:

Ants on the menu - mmmm delicious

Congratulations are in order to Discovery Cove in Orlando, Florida, and Cypress the lesser anteater on the birth of her little boy. Also known as the tamandua, these anteaters are native to the forests in Mexico to South America, and when adults can consume up to 9,000 ants a day with their 16 inch long (41 cm) tongues. 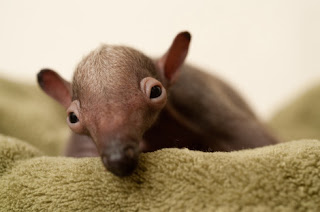 The new addition will hold on tight to his mother’s back until he is old enough to walk around and find food for himself. 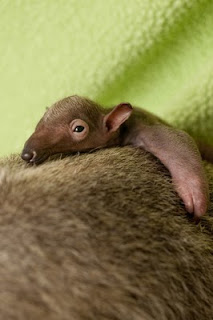 If nothing else, it just goes to show that there must be a heck of a lot of ants out there to sustain such creatures – it makes you itch just to think of it. 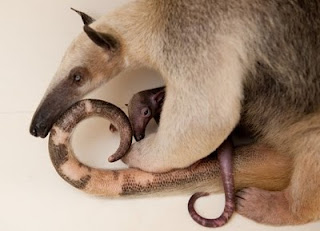 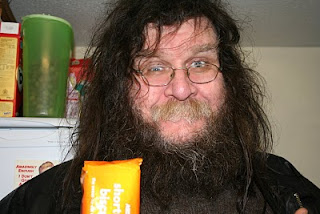 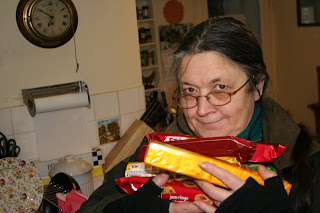 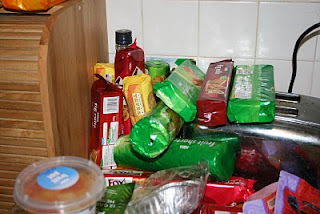 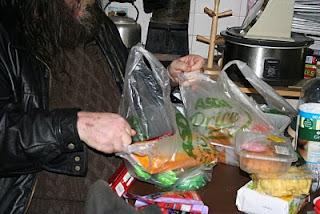 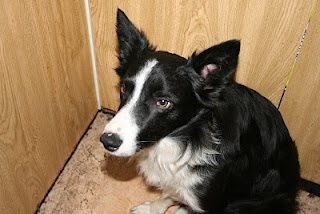 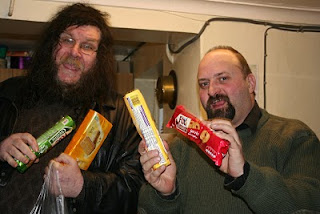 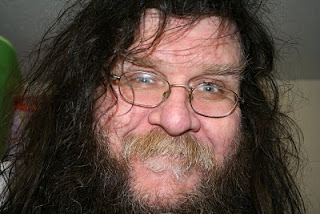 I know I have a telephone number for Bedlam somewhere.
I could inform Jon that I was always told that eating too many biscuits causes constipation. No doubt his response would be to mention that several of the packets are fig biscuits which will not only solve that problem but will also count towards his 5-a-day.
Posted by Corinna at 16:42 1 comment:
Newer Posts Older Posts Home
Subscribe to: Posts (Atom)