Last of the great surrealists

Tony Shiels introduced me to the art and writing of Leonora Carrington a couple of years ago. I had to admit not having heard of her before, mainly due to the fact that I am not really a lover of surrealism. However, I had heard of Max Ernst – mainly due to Loplop, his alter-ego on canvas in the shape of a bird. The CFZ has a model of this creation, which has featured in more than one Weird Weekend and – at present – keeps guard over Bigfoot and the giant snapping turtle, Quasimodo, up in the CFZ Museum.

On Tony’s suggestion I read one of Leonora’s novels last year , and I used to read it aloud at night so both Jon and I could enjoy it at the same time. The Hearing Trumpet is a very strange novel, but one that you cannot put down once starting. The heroine is a 92 year old woman who is given a hearing trumpet by her well-meaning friend. This then means that she can hear everything that her family is saying and finds out that she is to be taken to an institution. The adventures that follow are weird, funny and poignant and Leonora’s writing had both me and Jon laughing out loud at times, so much so that on occasion I would have to re-read a paragraph over and over before being able to finish it with a straight face.

Leonora died in Mexico City on 25th May of complications following pneumonia at the grand age of 94, and is survived by her two sons, Gabriel and Pablo. 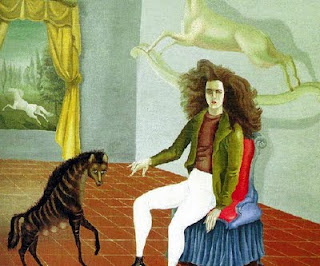 A visit to the podiatrist at Bideford hospital should have been a reasonably uneventful affair, apart from the fact that, in the end, Jon had to endure a minor medical procedure during which he had something drastic done to his big toe with a scalpel, and a strange looking gleaming instrument. He came out sporting that little child look of feeling slightly sorry for himself, but ever so pleased to have a bandage triumphantly wrapped around his left hallux.

That is all by the by, however. Perhaps the shock of the free show to which he and I had been treated before he had entered into the realms of the podiatrist (who sat waiting for him, grinning from ear to ear and armed with the instruments of wounding) had given him a rush of adrenaline; a weird sort of fight or flight instinct rushing through his veins. This combination had, therefore, enabled the podiatrist to cut his flesh without him flinching and to emerge from the consulting room glorious in his success.

You see, we had arrived at the hospital around ten minutes early, and had also not found it necessary to search for a parking space, so we were able to sit in the car park for a short while before Jon had to launch himself into action and attend his appointment. Jon used to reside at this hospital once upon a time, when nursing was his game, and his window overlooked the area in which we sat idly watching the world go by as we waited for the clock to tick those remaining minutes. In the flush of youth his reactions would most likely have been entirely different to the events that were to unfold as we were parked there yesterday.

The scenery was quite pleasant; the trees were all in full leaf in various, glorious shades of green, and the horse chestnut was in the last throes of blossom, teasingly offering a view of what is to come when its annual fruits ripen and fall to the ground. This will either be under their own steam or from marauding conker challengers armed with sticks or anything else that they can throw in their attempts to ensure the prize falls to the earth. However, being as it is a hospital car park, I am assuming that, in the main, it will be the former that will occur, apart from a few opportunists during visiting hours. In the corner of the eye, a male blackbird could be seen to be busily hunting for food in the shade of a beech, and the wind ruffled the leaves gently in the chilly breeze.

Then the occupants of the car next to us returned to their vehicle and in a second diabolically marred the serenity of the surroundings. Their car was on our passenger side so I could see them whilst talking to Jon. I have no idea what the slang is these days, but in my day it was builder’s bum or bum cleavage. But this was no builder. It was a young woman strapping her children into the back of the car who was revealing a little more than she probably thought. She was clearly wearing a pair of the so-called fashionable – and to my mind uncomfortable – hipster jeans. I have a pair that ease their way down to my nether regions at the merest mention of gravity and are constantly being firmly yanked back up to waist level , and secured with an ever –tightening belt in order to restrict their movement south. Why did I purchase such things? At the time, I found it nigh on impossible to find a pair of ‘normal’ jeans and had to make do with what was available.

This woman, however, seemed oblivious to the migration of her own pair and was exposing at least six inches of her lower cheeks to the air and the local wildlife, and also, to our horror and rather sarcastic amusement, us. I must remind you here that we are two ageing hippies that are growing more belligerent and unforgiving the older we get. And we were – by now – trying not to look at the free peep show whilst muffling our giggling and groans of repugnance at such an unfortunate display of bare flesh.

The car and its occupant with the offending buttocks eventually moved off, leaving us both staring out of the windscreen with looks of dismay and jaws dropped as if catching flies. The spectacle had clearly affected us. But then, it was time for Jon to make his unsuspecting way to the gleaming instruments and for me to doze off slightly, trying desperately to shake the vision that had so recently invaded my personal space. 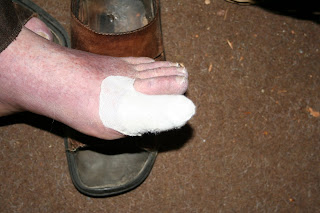 Sorry to disappoint those who may have been hoping for a picture of the offending buttocks, but this is the hero's toe in all its bandaged glory.
Posted by Corinna at 20:42 No comments:

Happy birthday wishes to my brother 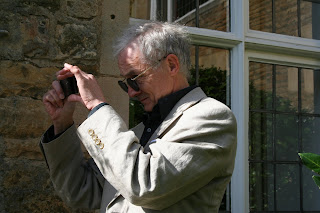 Have a nice day
Lots of love
Me xxxxxx
Posted by Corinna at 13:36 1 comment:
Newer Posts Older Posts Home
Subscribe to: Posts (Atom)