There's nowt as queer as folk

Hmmm well, we all knew that uploading a video of our experiences at the Lakes in Co.Kerry would attract comments of all different sorts, but I must admit that to read some of them has left me even more disgruntled with the human race than I was three days ago. Yes, we should all be able to take criticism, but I am not sure that we should take all insults lying down.

One comment accused Jon of being ‘just some old geezer rambling on and on and on’. Old? Is 50 years of age old? Several have stated, in a manner that can only be described as sarcastic, that we should try taking a tripod next time. Hmmm, well we were actually on holiday and had just stopped off at this well-known scenic view to take holiday snaps because our original plans had been thwarted by time overtaking us. We had not deliberately set out to take shots of strange goings on in the lakes – this was not a pre-arranged date with whatever it was – if we had arranged all this, yes we would have taken our tripod, lights and other filming paraphernalia. I can, perhaps, liken it to the trip to the supermarket Jon and I made yesterday, when we took a detour through a country lane rather than take the 'A' road, and came across a buzzard sitting on a telegraph pole which would have made an excellent photo and video as it flew away over the farmland. We both said out loud - darn I wish I had brought my camera. You simply cannot prepare for this kind of thing – it is impossible to do so because you are unaware that such a thing is going to occur.

There is the one who says the video is ‘booring!!!’ Was this a slip of the finger on the ‘o’ and ‘!’ on the keyboard or one of those weird modern extensions of a word that is supposed to make them more potent? Anyway, perhaps next time we will arrange a few car chases, explosions and some bikini clad young ladies doing a spot of juggling, accompanied, of course, by some mindless disco music in the background. Next time we go on holiday, we will hire a Winnebago and transport such extras just in case something like this happens again. Perchance then this viewer will find it ‘soooooooo much more excitinnnng!!!!!! LOL, PMSL’ . Imbecile.

However, out of all the mindless comments the one that incenses me the most is probably the ‘person’ that just had to introduce sex into the equation. ‘The only monster you saw old man was in Maxs pants, your so called 19 yr. old colleague’.

To insinuate that my husband is homosexual is – to my mind – actually not that funny. Call me old-fashioned, but that is certainly out of line. Don’t misunderstand me. I am, of course, not saying that being a homosexual is wrong. However, I am highly offended that this person seems to be suggesting that my husband is being unfaithful and is having some kind of relationship with Max. By the wording they are also suggesting that Max – the 19 year old we treat as a nephew - is a willing party to this suggested liaison.

I am not sure what such a small-minded vile creature thinks is so funny about intimating such a thing. Perhaps I shall ask him/her/it to explain the joke.
Posted by Anonymous at 15:18 4 comments:

Twice already in the last 5 years I have had to say goodbye to youngsters as they ‘left the nest’ and went out into the big wide world to fend for themselves at university and, ultimately, beyond. Over the last year, Max has become very much a part of this crazy CFZ household and Jon and I treat him as a 'nephew'. Now it is his turn to step through the doors of university life with all its various attractions, diversions and, of course the reason he is there, studying.

Max, we will miss you. We wish you all the very best at Bristol and hope you have a great time.

PS: Erm .... you have remembered to pack your pens, pencils and writing paper as well as your hip flask, best babe-magnet clobber, and copy of Tarkus haven’t you?
Posted by Anonymous at 02:13 No comments:

We are back from Ireland, as you may have already gleaned from Jon's blog. We had a great time and it was lovely to meet Tony and Christine Shiels. Tony took us on a sightseeing tour of some of the most spectacular scenery I have seen and also some very interesting Irish pubs - more of which I shall tell you later - but Guinness sure does taste better in the land of its origin, that I can confirm.

We may not have been able to to take our 'Toto' with us, but - considering this is magickal Ireland we are talking about - none of us batted an eye to see a little Cairn terrier sitting outside a pub in Killorglin (the venue for Ireland's oldest annual fair - the Puck Fair) with exactly the same colouring as the dog who took the role in THAT film.
Late Thursday afternoon found us at a scenic point known as Ladies View along the Ring of Kerry in Killarney National Park. The name apparently stems from the admiration of the view given by Queen Victoria's ladies-in-waiting during their 1861 visit. From this point you can see the three lakes in all their glory - Lough Leane, Muckross Lake (also called Middle Lake) and Upper Lake. I wonder what they would have thought if they had witnessed what we all did?
But to finish for now, here is a photo of me and my Wizard-in-law, which is the affectionate term Jon uses and one which I could not put better myself.

Tomorrow Jon, Max and I are off to see the Wizard - not in the Emerald City, however, but on the Emerald Isle. This will be a first for me as I have never been to Ireland and I am looking forward to seeing her. I am also looking forward to meeting Tony Shiels and his family – I have heard a lot about him from Jon and it will be nice to meet him at last.

However, unlike Dorothy we will not be using the cyclone travelling method to visit the Wizard – well I hope not anyway. Hopefully the night ferry journey from Wales to Rosslare will encounter no such weather conditions. There will also, alas, be no ‘Toto’ accompanying us as Biggles will be staying at home with Graham and Oll.

I was trying so hard not to use any references to the ‘oft present in the Christmas TV listings’ film but have failed miserably. No more references I promise. The fact that Jon wants to be the Lion and has voted Max as the Tin Man is the last time I shall refer to THAT film. Honest.

It will be three days ‘holiday’ during which time we can hopefully see some of Ireland’s history as well as visiting Mucross Lake, which is the home of a lake monster – or so it is said. Or, of course, I could while away the hours, conversing with the flowers, consulting with the rain – oops. Anyway, my camera is charged up and I hope to be able to share some photos with you upon our return.

Travelling light is always a challenge, but I shall make yet another attempt at taking as little as possible without forgetting to pack that little something ‘just in case’. Those ‘just in case’ items never do get used, but I know that if I didn’t take them it would only spur Murphy to inflict his Law upon me.

I will see you all late on Saturday perhaps – if not, on Sunday.

If you go down to the woods today

This is an interesting one methinks. 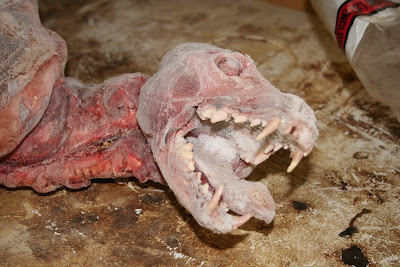 It takes a certain kind of stomach to be able to watch any kind of ‘surgery’, be it on a live subject or one that has shuffled off its mortal coil, and Naomi and Richie were very brave to do such a thing. Cryptozoology has always been a bit of a man-thing for some reason as I have said before in my blog. Not only that, there are not many of those men who actually ‘get their hands dirty’, unless their computer keyboards are a bit dusty that is. However, not only has Naomi flown the flag for those women in the field , she has definitely thrown herself into it with gusto at witnessing such a stomach-churning event. My hat is off to you Naomi.
Posted by Anonymous at 13:56 1 comment:
Newer Posts Older Posts Home
Subscribe to: Posts (Atom)