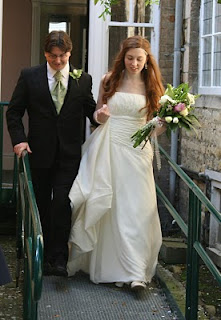 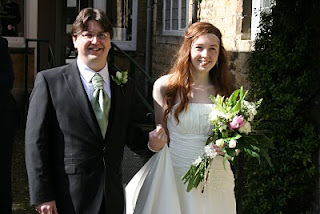 Friday, 17th September 2010
A beautiful day
A beautiful bride
A happy couple
Congratulations to Shosh and Gavin
May you have a wonderful and long life together
Posted by Corinna at 02:12 1 comment:

OK so everyone who reads the daily CFZ blog will know by now that my eldest daughter, Shoshannah, is getting married this coming Friday to Gavin - the 17th September being the anniversary of the day they first met, which I think is really sweet.

I offered to make the wedding cake – a task that I have thrown myself into with great gusto as I like baking, and it is always nice to satisfy my love for these escapades into flour, egg, sugar and butter alchemy, without having to eat everything I produce. It is the production of, rather than the eating thereof, that I like most about cake. However, the fact that the bottom tier was going to be the biggest cake I have ever tackled was a bit daunting, with the fairly important question coming to mind - will it fit in the oven?

Shosh and Gav decided that they would like a three tier cake made up of three different varieties – fruit, lemon and chocolate. Plus two ‘satellite cakes’. Satellite cakes you make ask? For those of you who don’t know what they are (and I must admit I had not heard the expression before): if it is doubtful that the cake you are making may not serve everyone at the reception - plus the little boxes for those who couldn’t make it - you can get round it by making:

A) a large slab cake which is kept in the kitchen of the venue to be cut into slices behind the scenes, or

B) a satellite cake which sits on the table alongside the wedding cake and is similarly decorated.

So we plumped for two ‘top tier’ tiny fruit cakes as our orbital additions.

Fruit cake – easy peasy – years of making Christmas cakes and I can almost make those with my eyes shut. Lemon cake and chocolate cake however not so easy – the trials I made were fairly successful; taste-wise they were OK, but the lemon was a bit soggy and the chocolate cake exploded when I tried to slice it into layers. The task of cutting a large cake into three different layers in order to fill with buttercream is a tad tricky. Apart from trying to keep the knife as straight as possible as you are cutting, there is the added problem of lifting the layers off without them destroying themselves.

Anyway, as I write this on Monday, the second tier is cooking and the whole lower floor of the house is filled with the aromatic scent of lemon. Later it will be the turn of the bottom tier and the accompanying - somewhat sickly - sight of a large saucepan full of melted chocolate and butter (Homer Simpson would be licking his lips at the thought I would imagine)!

Tomorrow it will be the turn of the lemon buttercream and the chocolate ganache (posh word for buttercream but it sounds very sophisticated!). Then it will be the delicate job of packing them very carefully in cake boxes to transport up and across to Lincolnshire on Wednesday with the aid of a cool bag and ice blocks! Let us hope it is not a really hot day for travelling or all could be lost.

I have warned my mother that I will be taking over her kitchen once Jon and I arrive at her abode on Wednesday. I hope she doesn’t mind too much – I know from experience that a kitchen is the most sacred room in the house for some females – me included.

Well.... that is it from Fanny Cradock (which means Jon must be Johnnie!) for now. I will let you know how my mum, Shosh, Olivia and I get on with our attempts at being florists for the day - we are making a bride bouquet, three bridesmaid bouquets, one flower girl posy and quite a few buttonholes on Thursday!

It all looks so easy on YouTube!
Posted by Corinna at 16:18 No comments: 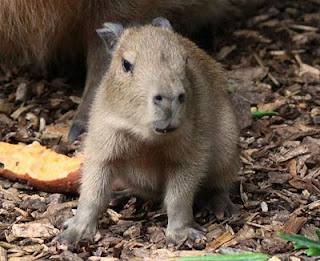 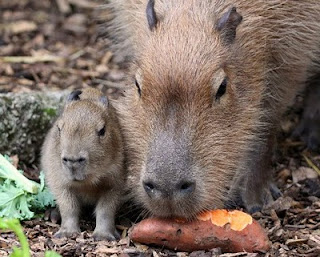 In the wild they have a lifespan of 4 – 8 years but on average this is less than four years due to them being the favourite food of various predators such as the jaguar, puma, ocelot, eagle and caiman, as well as being the anaconda’s preferred meal.
Posted by Corinna at 11:49 No comments:
Newer Posts Older Posts Home
Subscribe to: Posts (Atom)