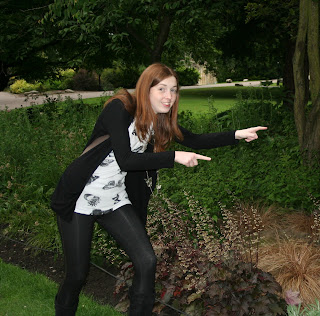 My mother can oft be heard to say, upon hearing someone giggling, ‘he/she has spied a titter’s nest and is laughing at the eggs’.  I cannot find any definitive reference to this,  but have found several clues (perhaps).  For example, one of the several collective nouns for magpies is a tittering.

And at   http://www.phrases.org.uk/meanings/mares-nest.html I found the following:

“Animals are often alluded to in phrases of this sort, for example, lion's share, dog's breakfast, bird's-eye view etc. Of course, this one is different, in that mares don't make nests - the allusion was meant to be comically ironic. That humour is reflected in several of the early citations of 'mare's nest' (or horse's nest, as some early references have it), which refer directly to laughter, for example, John Fletcher's Jacobean tragedy Bonduca, circa. 1613
Why dost thou laugh? What Mares nest hast thou found?
The joke was pushed further by Dr. [Jonathan] Swift, in the play Miscellanies, 1751:
What! Have you found a mare's nest, and laugh at the eggs?”
Or is it perhaps just one of those old lines quoted by someone such as Frankie Howerd?  His well-known “Oooh no missus, titter ye not” doesn’t really have any connection as such, but somehow I can just hear him saying “Oooh missus, he has spied a titter’s nest and is laughing at the eggs”.
So, is there anyone else out there who has heard of this saying? And if so, do they know from whence it originated?

I came across this old photo taken – I think – on Redondo Pier, Southern California back in the late 1990s. It would appear that I am chatting to the seagull about the notice. Maybe we were wondering when we could expect to see the arrival of those oft-celebrated fish on bicycles. Perhaps after their annual ride around the pier? 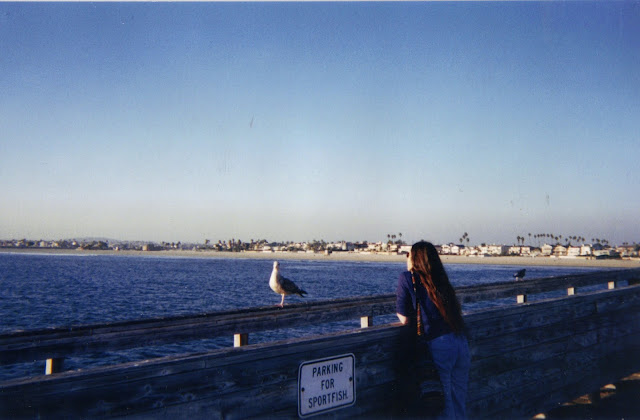 Hey Pollywiggle! Hey Pollywog! One of these days I'll be a frog. I'll kick my legs and swim around Without a splash and never a sound.

We – that is Jon, Pru and I - had left Woolsery on a bright, blue-skied, cotton-clouded, spring Sunday morning. Our mission?  To visit a bird auction in Northam, visit Northam Burrows to do a spot of wader-hunting, call in at Asda to purchase some provender, and then on to Huddisford Woods to take Pru for a walk, while visiting the frog spawn we had been noting for the past few weeks.  We also wanted to take a look at some of the well-used animal track-ways that we were keeping an eye on.

The auction was being held in the village community centre, its main eye-catching feature (apart from the birds of course) being  a huge, magnificently painted galleon in full sail adorning the back wall.  Amongst the frightened budgies was an assortment of equally worried-looking avian specimens.  We left Pru in the car, obviously, but she was oblivious to our departure, as she was too busy being briefly occupied in announcing her presence to a rather splendid-looking female basset hound, whose owner was taking her for a short perambulation around the grassy area of the car park, whilst her husband (I assume) unloaded more feathered exhibits from the boot of his car.

There seemed to be an ongoing skyward battle between the sun and mist – every so often the former seemed to win and shine through, its reign soon usurped by the grey miasma.  By the time we got to Northam Burrows, the latter had definitely won the day – the whole place was covered in an eerie blanket of the stuff.  It was creepy.  It swirled around like a hundred wraiths, wrapping itself around bushes and clumps of grass, leaving tiny droplets of water against webs spun by conscientious spiders.  There were a few golfers about, and a few people walking their dogs, or just themselves, and a small amount of through traffic, but the place seemed devoid of bird-life; the only other beings to be seen being the various horses and ponies that wander around the burrows, chomping their way industriously from one part of the place to the other.  A wooden post provided one pony with an ideal implement on which to scratch its chin contentedly, the beast’s moult in full flow by the look of its rather dishevelled coat.  From out of the mist came shapes  -  odd distorted shapes – that once becoming closer showed themselves as nothing more than a person wearing a stiff, water-proof jacket, its unbending angles no longer taking on the appearance of something completely different and indefinable.

The tide was out, and whilst you could see the defined tracks of several birds making their soggy way across the pale brown mudflats,  we only saw one herring gull and two other gulls of some description sitting on a rock, undefined due to their distance.

On the way back across the burrows, trundling carefully and zig-zagging down the slightly pot-holed road, we became virtual tail-end charlies at the end of a queue of traffic.... a very odd situation to find oneself in such a weirdly desolate place on a spring Sunday afternoon.  It was not until our car moved with the line, that we realised what the holdup was.  One of the horses, swathed in a rather tatty looking brown blanket,  had taken it upon himself to stand stock still right in the middle of the already narrow thoroughfare, forcing both lines of traffic  to go alternately, and  very cautiously,  passed the animal.  One wonders what was going through its mind as it stood there – an equine traffic island – completely oblivious to the amusing and not at all irritating disturbance it was causing.  As we slowly moved passed it, I wound down the window and it curiously turned its head and reached its soft muzzle in, a sad left eye recognising the human form inside the metal box beside it.  All this much to the consternation of Pru, who was sitting in the boot space of the car where she has taken to watching where she has been disappear into the distance behind her.

But the absence of any interesting bird life was excitedly enlivened by the appearance, at the last moment, of a little egret standing gracefully quite near the side of the road.  In my urgency to pull over I must have confused the car behind somewhat as I accidentally indicated to go right rather than left, but considering the other day I discovered that I had driven all the way to Bideford in broad daylight with the main beam on, that was nothing in comparison. Besides, we were only travelling at around 5 mph.  Jon managed to snap a picture of the bird just as it took flight, and it has become another name on the ever-growing list of birds spotted out-and-about with Jon and his camera.

Asda was...well....a typical supermarket on the afternoon of the seventh day; nothing much to talk about, nothing much to see,  and not a lot of cheapo, reduced-to-clear goods to be purchased either.

On then to Huddisford Woods, where Pru could have her constitutional, and where we found that ‘our’ tadpoles had hatched and were wriggling around enthusiastically.  Such bigheads, those pollywiggles.  The recent wet weather had done wonders for the track-ways....deer prints were clear as day and so were a few other large prints; the wet earth making an excellent medium for indentation.

By the time we got home, the mist had won the battle for supremacy over this part of Devon and whilst the day had begun with a promise of warm weather on the horizon, the late afternoon sent a completely different message.  Don’t throw out the thermal underwear quite yet.
Posted by Corinna at 18:05 1 comment:
Newer Posts Older Posts Home
Subscribe to: Posts (Atom)