December 1st 1987 and along came Olivia. 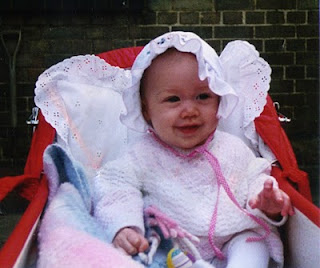 The poor girl is suffering at the moment and has had to cancel her birthday party, but I hope she can enjoy her day as best she can. She is at present staying with her sister up in Staffordshire, along with Ivan, and all three of them are laid low with flu-like symptoms. I hope you all feel better soon, poor things.

And although you are feeling rotten, it is still the 1st December - So... 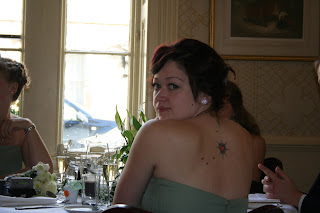 Invasion of the cane toads 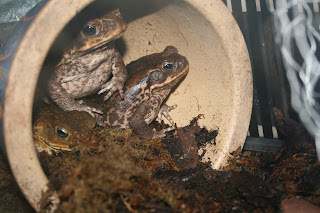 Apparently there are four collective nouns for toads: a knot, a nest, a knob or a lump. Looking at the above photo I think I shall plump for a lump.

And why I have I posted a photo of a flower pot containing a lump of toads? The answer is really quite simple. Thanks to Ross Braund-Phillips, who had seen them advertised in the paper, today (Saturday) I received an early Christmas present from Jon in the form of a pair of cane toads that were residing in Barnstaple, but were looking for a new home. Upon arrival here they immediately squeezed themselves into the flowerpot where they and Mog seemed to happily introduce themselves to each other, albeit in a rather non-genteel lumpy kind of way. I think toads must have been on the wrong side of the door when basic manners and the ideas of personal space were given out.

The new inhabitants have no names yet, but I am sure that will soon be rectified. One point though. Methinks a bigger lounge pool is in order - with all three of them in there at once it will become as cramped as Brighton beach on the first sunny Sunday afternoon of summer.

Once again - thanks to Ross for his eagle-eyes and for telephoning the chap selling them. You are a dear.
Posted by Corinna at 21:02 No comments:

There is something special about being awoken from a night’s slumber by the twittering and callings of the dawn chorus. You can either yawn, turn over, and wrap yourself in the soft warm quilt knowing that you have a few hours yet before having to get up, or you can have a good stretch and stick one leg out tentatively in preparation for encouraging the rest of your body to follow suit - until you find yourself in a rather shocked standing position.

Neither of those applied to me when I woke up yesterday morning. I was greeted by the very contented sounds of the duo next to me, and there I lay - somewhat dazed - as my very own dawn chorus built to a crescendo with one of those involuntary whistles from the bearded one (I can only liken the sound to a whistling kettle when it alerts you that it has reached boiling point). Then slowly – and quietly at first - the puffings, snortings and snores of the man and his dog increased in volume until they snortled in a plethora of harmonies that put even The Beach Boys to shame.

We all know that Pru cannot really help it due to her harshly bred facial features. And the bearded one’s quick excuse? “Not my fault – the dog had me pinned down in the wrong position.”

Item one on my Christmas wish list: one pair of heavy-duty ear plugs.
Posted by Corinna at 21:28 1 comment:

Pru had apparently been found in a ‘puppy farm’, and after much negotiation the woman who had taken pity on her managed to extract her from the awful predicament Pru was in, but not before having to part with £300. Unfortunately, though (and after around eight months of trying) it became painfully clear to her new carers that Pru could not stay with her new family due to a combination of there being lack of space, an elderly collie and two small children sharing the house with her. The collie found her too boisterous and Pru (being a rather stocky individual) had a tendency to flatten the children with her lovable greetings. The woman who had rescued her could not find anyone else to take Pru on and eventually came to the decision that she would have to ask the vet to administer the final injection. However, the vet felt that she was just too lovely a dog to be destroyed, and contacted the North Devon Animal Ambulance to see if they could take her. And, of course, they did.

However, the organisation also found that it was difficult to re-home her due to her mixed breed. Perhaps prospective adoptees were confusing one half of the mix with the more infamous English bull terrier or just thought her appearance was intimidating. Who knows? But no-one was interested.

Anyway, Jon, Graham and I were all immediately taken with her when we went to see her on Tuesday and all at CFZ HQ were really pleased when Myrtle Cottage was given the all clear after the necessary NDAA inspection. So we are now fostering her for a couple of weeks to see how we all get along. 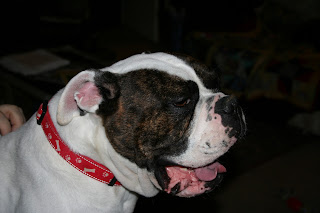 Our main concern was how she would get on with the cats as there was no way of knowing how she would react in their company. It became perfectly clear from the start, however, that she was completely uninterested in Helios, Spider and Poppy, although they were all suitably wary of her appearance. Since Wednesday evening’s sudden disruption to their relaxed routines, Helios and Poppy ignore her by giving her a wide berth. But Spider has been rather more forthcoming. Over the last few weeks he has adopted a rather alarming chauvinistic attitude towards the female of his kind and gives the impression that he thinks Pru is a rather large female cat. He has stalked her twice and deliberately tried to pick a fight on each occasion, but much to his mortification, she has completely ignored his show of misplaced machismo.

Pru is extremely loving, is as soft as butter, and adores human company. She has taken to following me everywhere and bumbles along peacefully on her walks. She enjoys nothing more than to go for a walk and then sprawl herself on the chair to snore contentedly and very loudly. And today she even smells a little better than when she arrived on Wednesday evening - she had the suspicious aroma of old, dirty socks or, to put it another way, was rather ripe. Oll volunteered to give her a shower and although she didn't seem particularly thrilled at the prospect, she made no fuss at all. I had visions of poor Oll being left prostrate on the wet, slippery bathroom floor while she made a dash for freedom at the first opportunity trailing a cloud of bubbles behind her. 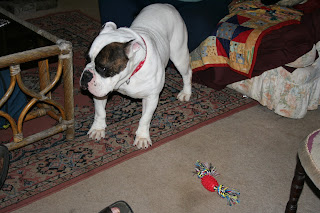 She does not seem to have been taught the basics like sit, down and stay and does not even seem to know what a toy is, bless her, but hopefully all of these can be taught. All of us here hope that we can adopt her and give her a happy and peaceful life.
Posted by Corinna at 03:58 1 comment:
Newer Posts Older Posts Home
Subscribe to: Posts (Atom)