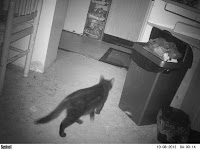 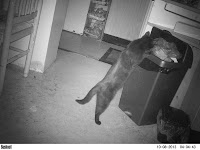 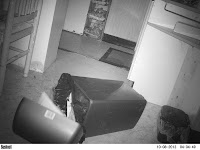 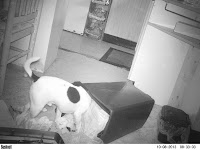 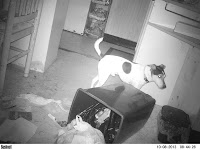 PPS: And it has since transpired that Morticia is a well-known felon and certainly not new to this kind of crime.  I have it on good authority that the bin at her previous abode suffered similar indignities.
Posted by Corinna at 18:50 No comments:
Labels: kitchen bin, modern art

I have never been a fan of modern art; unmade beds or a half-open, half-eaten can of baked beans in the middle of an empty room, with one sticky bean 'artistically' left where it dribbled down the side of the can to stick itself on the floor, don’t really rock my boat.  However, as can be seen from the photos, it does appear that we have an exponent of such artistic ‘talent’ here. Yes right here, in a kitchen in deepest, darkest . 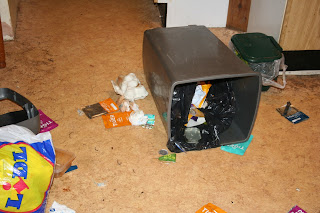 Whodunnit?  Well I do not believe for one minute that it was one of our resident ghosts.  So there are three humans, four cats, and two dogs that are in the running.  We know that it was not Poppy McGregor, my cat of aged years, who likes nothing more than to sleep and then pop outside for a natural break and sniff round her ‘hood. We know that it was not Prudence the dog, because she was on our bed, and although she came downstairs at one point in a huff (apparently she tried to boot Jon out of bed and went off in a sulk when he chastised her for her impudence) she soon returned when thunder rumbled in the distance.

So we are down to six possible offenders: 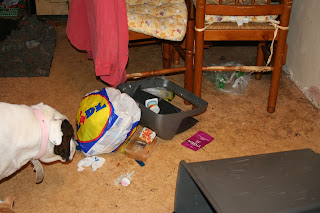 Now, it is quite possible that the two kittens could have ganged up together as they do tend to hang around in a pair menacingly, flattening everything in sight, and then chilling as if butter wouldn’t melt in their mouths like two spotty-faced kids  around a bus shelter plotting their next act of defiance against the system.  However, I do have to admit to have witnessed the bin going down under attack from one of them in the past.  But that was before I was alerted to the bin’s vulnerability and began to wedge it under the counter.

So who has the crowbar and the weight behind them to un-wedge the defenceless receptacle?

Let us look at the psychological profiles of the two remaining suspects:
So, readers, who is the perpetrator?  I think I know who the guilty party is.  If only I could speak ‘cat’ as Poppy may well have witnessed it all and I have a feeling she would be quite happy to squeal on the offender (or offenders).  On the other hand, she was probably also away with the faeries and missed the whole messy project as it formed itself on the floor around her.

Where is Hercule Poirot when you need him? Probably off on some cruise down the Nile I expect. I think, therefore, that this may be a job for our very own spymaster and sleuth, Graham. Tonight, I shall ask him to open his special box of tricks. A box containing, amongst other things, cans of lager, rollie dog-ends, the occasional mug growing its own special culture, and…hopefully …a trail camera. If all goes well, tomorrow we may have our culprit (or culprits).
Posted by Corinna at 12:46 No comments:
Newer Posts Older Posts Home
Subscribe to: Posts (Atom)