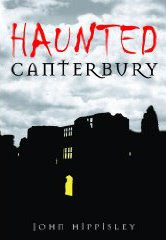 Haunted Canterbury (John Hippisley - History Press ISBN 978-0-7524-4998-2 £9.99) – now this is not a book for the delicate. I read this one in bed in the early hours of the morning and even I, whose own hand does not falter at writing fairly descriptive passages of death and destruction, felt a horror at some of the hauntings. There are a couple of entries that I found myself having to re-read just to make sure I had got them right the first time.

There is obviously a lot of history attached to Canterbury. Like London, it is one of those cities that has been around for centuries and much has occurred there throughout history. Canterbury, of course, is where Thomas a Becket met his untimely end and there are, as to be expected in those that believe, many sightings of those connected with that event. The city also boasts the most haunted street in Britain, St. Margaret’s Street, where there are around 27 sightings a year.

In cities and towns as old as Canterbury new buildings are bound, over the years, to be built upon the sites of others or on areas of a more dubious nature. Archaeological investigations in the 1980s revealed massive burials from around the time Henry VIII decided to dissolve the church and have those connected with it massacred. The fact that Christchurch University accommodation block is now built upon this place of burial has a peculiarly macabre feeling about it.

There is the story of how several medical students, living down the aforementioned St. Margaret’s Street in a building that for over 300 years had once been a pub, decided to make a Ouija board and have themselves a séance. The upshot of this was that the events that occurred during and after this séance scared them witless, especially as one of them awoke in the early hours to find the kitchen mirror, which was usually located on the top of the stairwell, levitating over him. He saw the face of an old woman staring back at him, at which he screamed, waking his friends and causing the mirror to shatter covering him in shards of broken glass. By the time his friends broke down his door he had lost a pint of blood and had to have skin grafts to his face and chest. The author delved deeper into the history of the place and discovered that a former inhabitant had committed suicide there. I shall not go into her exact method because its detail is not for this blog, but is horrific to say the least.

I shall also not go into detail about the case of the corpses of four children, carbon dated to around 1412, that were found in an attic. I will just say that the events that occurred on the night that the author and a friend stayed in the relative building will cause the hair to stand up on the back of your neck and a cold chill to travel down your spine.

At the end of the book is a short list of other hauntings around Kent, some of which had a personal interest as my paternal family originate from Tunbridge Wells and my paternal grandparents used to live in Rusthall – a place that seemingly has a few stories to tell of its own.
Posted by Anonymous at 11:47