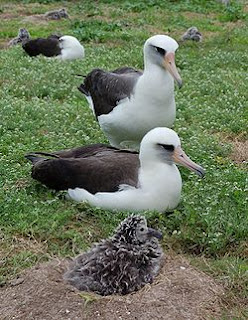 But for now at least, officials at the Hawaiian and Pacific Islands National Wildlife Refuge Complex are greatly thrilled at the return of Wisdom and that she survived the March 11 tsunami. Let us hope that she continues to ride the thermals for many more years to come.
Posted by Corinna at 14:00