And never a bleat was heard

Jon had been approached a while back to do an interview for an American film company regarding the ‘Beast of Dartmoor’. It was supposed to have taken place a couple of weeks back, but the 'Iceland Incident' had quashed those plans, and after many alterations in arrangements it had finally been decided - during this week - that the filming would take place on Dartmoor. If nothing else, it presented a nice excuse for sandwiches, cake and a giant flask of tea, and a day out with - hopefully - nice weather to accompany us on our jaunt over the stunning scenery of the moor.
Biggles decided to show his appreciation for the trip by throwing up his breakfast over the back seat of the car – nice one Biggles! Ah the joys of clearing up vomit from the back of the car whilst parked in the entrance of a field, with rear end dangerously crossing the thin line between off and on road. All the while being watched by the benefactor of such delight, pathos etched upon his face. Chunks of ….. well I won’t go any further. It was like taking the children out on a sunny day’s trip to the country all over again!
The scenery changed somewhat when we came upon the journey through Princetown, famous - of course -for its foreboding structure, Dartmoor Prison, which sat staring at us with austerity. Then it was out again over the cattle grid and on to the moorland where the ‘pedestrians’ have no respect for the Highway Code whatsoever, and why should they? Several stops later, in order to accommodate various sheep, cattle and the odd foal crossing the road, we eventually met up with the film crew in a lay-by. And there were a lot of them – and all were being transported around in black vehicles that dwarfed our little Daihatsu. Passers-by may well have got the impression that it was a Saturday afternoon meeting of the local ‘Men in Black Club’. 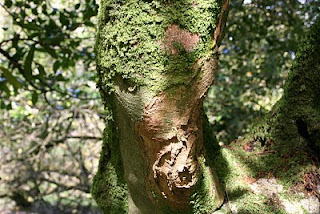 Biggles, however, was unimpressed and was more interested in sniffing here, there and everywhere and leaving his scent wherever possible on the landscape. And then I was back in the car, and the sinister looking entourage moved off slowly, with us nestled in second place, to a beautiful little spot they had found that was ideal for the filming they needed - just down the road from Burrator Reservoir. 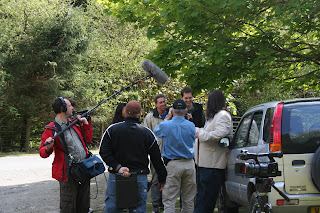 A few hours later it was the trip in reverse, this time encountering the ‘teasing’ sheep. These are the ones who threaten to cross the road but loiter at the verge instead. They taunt you into playing a game of ‘kangaroo’ down the road whilst they put one foot out, then back again, and then look disdainfully at you, all the while chewing as if pounding a stick of gum between maxilla and mandible. Perhaps they were just poking a proverbial tongue out at the sheepdog that was asleep on the back seat of the car - blissfully unaware of their audacity. 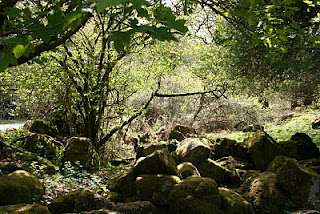 And to round off a very nice Saturday sojourn, Jon and I heard our first cuckoo in years. This may seem a pretty unremarkable event to some, but it was only the other day that I mentioned to Jon that I had not heard a cuckoo in ages, to which he replied that he hadn’t either.

Dartmoor! thou wert to me, in childhood's hour,
A wild and wondrous region. Day by day
Arose upon my youthful eye they belt
Of hills mysterious, shadowy, clasping all
The green and cheerful landscape sweetly spread
Around my home; and with a stern delight
I gazed upon thee. How often on the speech
Of the half-savage peasant have I hung,
To hear of rock-crowned heights on which the cloud
For ever rests; and wilds stupendous swept
By mightiest storms; of glen, and gorge, and cliff,
Terrific, beetling o'er the stone-strewed vale;
And giant masses, by the midnight flash
Struck from the mountain's hissing brow, and hurled
Into the foaming torrent; and of forms
That rose amid the desert, rudely shaped
By Superstition's hands when time was young;
And of the dead, the warrior dead, who sleep
Beneath the hollowed cairn! My native fields,
Though peerless, ceased to please. The flowery vale,
The breezy hill, the river and the wood,
Island, reef, headland, and the circling sea,
Associated by the sportful hand
Of Nature, in a thousand views diverse,
Or grand, or lovely, - to my roving eye
Displayed in vain their infinite of charms;
I thought on thy wild world, - to me a world, -
Mysterious Dartmoor, dimly seen, and prized
For being distant and untrod; and still
Where'er I wander'd, - still my wayward eye
Rested on thee! 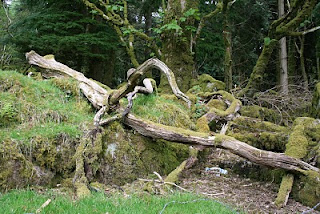