You must have been a beautiful baby 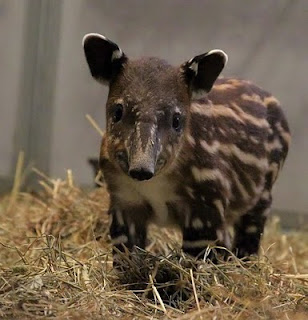 During the torrential rain and flooding experienced in Nashville over the first weekend of the month, Nashville Zoo welcomed the arrival of two 'storm' babies. One was a Eurasian lynx cub, born on the Saturday, and on the other was a Baird's tapir which was born on the Sunday.
These tapirs are the national animal of Belize and commonly referred to as 'mountain cows' in Central and South America.When he grows into adulthood Noah (as he has been christened) will lose his reddish-brown coat brightly marked with white streaks and spots and acquire the distinctive cream-coloured marking on his face and throat, and a dark spot on each cheek, behind and below the eye. The rest of his hair will be dark brown or greyish-brown and like other tapirs he will have a small stubby tail of around 3 - 5 inches and a long, flexible prehensile nose. He should reach around 2 metres (6.6 ft) in length and 1.2 metres (3.9 ft) in height, and weigh in the region of 240–400 kilograms (530–880 lb) - Baird's tapirs are the largest and heaviest of the New World tapir species.
In its natural habitat the Baird's tapir is found in the dense jungles of Central America including southeastern Mexico, Belize, Guatemala, Honduras, Costa Rica, Nicaragua, Panama, Colombia, and Ecuador.and can be found at altitudes as high as 3,350 metres (10,990 ft). They can be either diurnal or nocturnal, eat plant matter and communicate with shrill whistles.
This tapir has been classed as endangered by the ICUN and in 1996 it was classed as vulnerable; hunting and loss of habitat being two of the main reasons for this status.
And talking of beautiful babies, how about little Einstein the griffon vulture born at Hamburg Zoo recently? Beauty is in the eye of the beholder and I am sure his parents must love him: 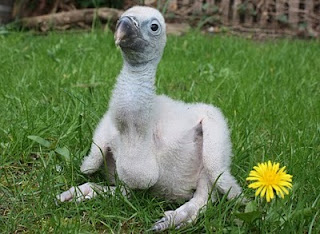