I have been following Richard's blogs on the subject of Lincolnshire legends and was wondering whether the infamous Lincoln Imp would feature. I was not to be disappointed and on Friday there he was. I can proudly announce that such a fellow sits upon the kitchen wall here at Myrtle Cottage.

In April last year, I wrote about him and several other interesting features of Lincolnshire:

A Tale of Two Imps

Although I was born and raised in Middlesex, I spent the years from 1985 to 2007 in Lincolnshire. I used to live in Stamford, an old picturesque town that boasts the location of the magnificent Burghley House which has been used in many a TV serial or film. I remember sitting in my car at a set of traffic lights, on my return to work one lunchtime, and - looking in my rearview mirror - was taken aback to see a coach and four pull up behind me as it did it's round-the-block route for a take while Middlemarch was being filmed in the town. Very surreal.


Just down the road from where I used to work lay the remains of Joan, Princess of Wales - also known as the Fair Maid of Kent due to her great beauty - wife of the Black Prince and mother of Richard II. She was laid to rest in January 1386 in the grounds of Friars Minors, according to her wishes that she be buried in her chapel, but has found herself now located in a garden, due to the building of houses on the land!


I love early English history and I know that the following may not stir the ancestral blood of a lot of those who may read this, but I do have a strong fascination about our country's past and thought I would write one of those little slices of history blogs that I do every so often. To think I used to work a two minute - if that - walk away from where the mother of one of our Kings is buried in a leafy garden in a small town in Lincolnshire is kind of odd to say the least. Then there are the Eleanor Crosses. King Edward I had these crosses erected in memory of his wife, Eleanor of Castile, to mark the nightly resting-places along the route taken by her body as it was transported to London. It took twelve stops and at each of these a cross was built, of which three amazingly survive today (Geddington, Hardington and Waltham). The twelve places were Lincoln, Grantham, Stamford, Geddington, Hardingstone, Stoney Stratford, Woburn, Dunstable, St Albans, Waltham, Westcheap (now Cheapside) and Charing (Charing Cross).


In those harsh days there is something so touching about the fact that he thought so much of his wife that he marked her last journey in such a way. And that three of the crosses still stand today in her memory (with pieces of some of the others in museums near the towns they were erected) is nothing short of a miracle.


I am also a sucker for folklore, and Lincolnshire, as every other county, has its fair share. According to legend, way back in the 14th Century, Satan sent two imps to earth with the prime objective of doing mischief. In some versions of the story, they first went to Chesterfield where they set upon the spire of the Cathedral and twisted it – their handiwork still in evidence today. They were then sent to Lincoln Cathedral to cause mayhem there. As the story goes, they set about their work with obvious glee, smashing up tables and chairs and even tripping up the poor Bishop. However, when they started to interfere with the Angel Choir, one of the angels decided that enough was enough and told them to stop. One of the imps was brave and started throwing rocks at the angel, but the other imp cowered under the broken tables and chairs. The angel turned the first imp to stone and this gave the second imp a chance to escape.


There are a few different variations of the story, one telling that the second imp that escaped did so with the help of a witch, by jumping on to her broomstick. However, she became so fond of the imp that she turned him into a black cat. Not so good for him really then. However, in another version, this escapee was said to have travelled to Grimsby where it entered St James' Church and began repeating its destructive behaviour. The angel then reappeared and gave the imp's backside a good thrashing before turning it to stone like its friend. The Grimsby Imp can still be seen in St James' Church, clinging to its sore bottom. Another legend has the escaped imp turned to stone just outside the cathedral, and sharp-eyed visitors can spot it on a South outside wall.


Other stories tell how only one imp was blown around the country by the wind looking for places to cause mischief, and following his efforts in Lincoln Cathedral the angel turned him to stone after he had gone to the top of the nearest pillar to admire his handywork. Hence he is found there today with his legs crossed sporting an evil grin upon his face.


A more detailed version goes into how he was sent to plague the clergy in the cathedral and how he was blown through the great west door by the west wind and blew out the candles, scattered the hymn sheets and attacked the choristers. He then flew into the angel choir and it was when he threatened to pluck out the angels’ feathers, that the smallest angel turned him to stone.


Whether you believe there were two, or just the one, or - indeed - if you do not believe it at all, measuring 12” in height, he is definitely still sitting there now, grinning down, cross-legged at all who pass below. He has become the symbol of the City of Lincoln, has the local football team named after him and is used on many a company logo. He has become the symbol for good over evil. My late ex-mother-in-law had a tiny model of one in her kitchen – as, indeed, do I.


It is a shame that there are no records kept of who carved such gargoyles and effigies in our massive Cathedrals. It would make an interesting read indeed as to the background of their existence.


Anyway, if any of you find yourself in Lincolnshire at any time, a visit to the Cathedral in the county’s capital is a must – not just for the beauty of the architecture - but to see, also, if you can spot the miscreant for yourself. Apart from that, old Lincoln is a beautiful place to visit, perched on top of a hill, with cobbled stones up the narrow streets and still some old buildings in existence down the lane that leads to the less picturesque modern part of the city. Jousting events are held in the castle grounds each year and it is a marvel to see, and hear, the knights riding through the cobbled old part of Lincoln on their way to the tournament, kitted out in full armour and colours, with a lady’s favour fluttering in the breeze as it hangs from their lance.


As the Visit Lincolnshire website states “As you approach the City of Lincoln, from any direction, you are drawn to the magnificent silhouette of the Cathedral stretching to the skies, brooding over 2000 years of history”.

He may only be two and a quarter inches tall, and certainly not what you would call an attractive chap, but I have grown very fond of his impish features as he poses cross-legged and casts his wickedly gleeful stare over the kitchen. 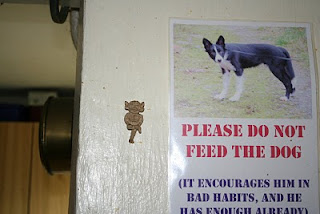