Biggles is re-surfacing with gusto

Biggles' fans are wondering where he has got to. To let you into a secret, he had been sulking for ages after his operation and has been hesitant to show himself in fear of the girls out there scoffing at his predicament. However, he has now gotten used to the idea and has probably realised this now means that he can mix with members of the opposite sex at will, without fear of them fraternising or getting himself into any awkward paternity suits.

He has been busy in the garden these last weeks, mainly chasing anybody with a watering can and then making a bit of a fool of himself trying to catch the water from it. We must not forget – of course – the frequent infamous rake chases. He has managed to basically destroy four – yes four – Frisbees over these halcyon days of summer, despite the fact that at least two of them were supposed to be indestructible. Perhaps Frisbee makers should hire him to test out their theories. He is actually quite adept at leaping in the air and catching them on the trot - he really should have been in the England goal perhaps. However, the ball would probably not have fared quite so well, methinks. I have to say though that the lawn looks a bit like a disused ufo landing site, with half broken plastic discs dotted reminiscent of those old World War air fields full of the skeletons of disused and rusting aeroplanes that once flew so smoothly. Ah well, it keeps him happy. 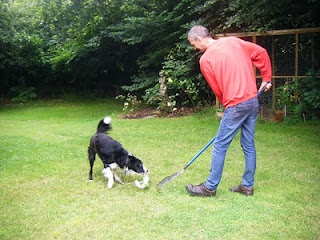 He is still attempting a major takeover bid of the bed each night. I am sure his eventual aim is to claim it all for himself and over the past few nights both Jon and I have ended up dangling our posteriors over the edge of the bed, without the comfort of a duvet covering them, as Biggles has somehow managed to gather it around him in the middle of the bed.
Posted by Corinna at 12:28