What the hail is going on and why are your shorts wet?

I have to explain right at the beginning of today’s entry, that the last of the above two questions will not be answered on this blog, but I thought that it added a little spice to the heading, without blatantly shouting, “ Roll up, roll up, hear all about it.  Come on in and be amazed, shocked or even beguiled by the saga of the wet shorts incident in Tesco”.  And I bet there are a few of you who thought the wet shorts were something to do with the hail.  You see, that is why it would make such good reading. They are completely unconnected,  the story behind the shorts is so much more interesting,  but no.....I am not going to stoop to the level of Daily Star reporting, or – perhaps I should write – what I understand to be the level of Daily Star reporting, as I have never actually read the waste of paper myself.

After five weeks of having her to stay, Jon and I took my mum back to Rutland on Thursday, returning here to Devon last night (Sunday).  It was horrid having to take her home and leave her yesterday, and we miss her, but she needed to get back into some kind of routine at her own pace, and also not have to listen to the peculiar music that has a habit of seeping under the door to the office on occasion, as well as me talking to myself about nonsense most of the time.   Jon had planned to be able to update blogs etc., from his laptop using a dongle but unfortunately, the signal in the most expensive county in England was worse than it is back here in Woolsery.  After hours and hours of slow, almost impossible, connections, Sunday’s updates were given up as a lost cause and it was decided to use the free WiFi facilities at several motorway services on the journey home instead. This meant that a couple of jaunts we had hoped to make whilst in Rutland, and a visit to the Eleanor Cross at Geddington on the way home were thwarted and postponed for a later date, as we needed to get to the first services as soon as we could. Corley Services on the M6 was, therefore, the first port of call on our way home. 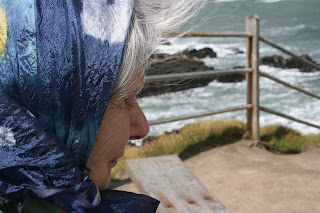 So three hours later, and many blogs under his belt - and after I had swallowed the contents of two grande cups of black Americano coffee  (which was probably not a prudent idea as I developed a severe episode of hyper-twitchiness and had to eat an egg and mayo sandwich to calm myself down) - we prepared to set off on the next leg of our journey.  That was until the heavens opened up, and there fell to earth a torrent of pea-sized hailstones that were really the last thing you would expect to appear during an end of July  day. And lightning. And thunder.  Thor was obviously not just moving around his furniture, but must have been doing a spot of heavy-duty DIY as well. Perhaps he had been defrosting his freezer and had swapped his hammer for a very large electric drill.   However, Thor is a mighty warrior god and I have no wish to be rude about his home improvements, but I did feel sorry for the  little girl who was running for cover with her mother as the downpour gathered momentum. The poor child was crying her eyes out as the icy beads stung her bare shoulders.

Anyway, Jon and I hobbled to the car and waited the storm out before continuing down the M6 towards the junction for the M42.  We stopped again at Sedgemoor Services on the M5 so that Jon could finish his tasks on the computer, but this time I had a pot of tea.  From then on it was pretty much plain sailing, apart from being followed at one point by not one, but two, police cars – in fact there seemed to be one loitering by every roundabout/lay-by along one particular stretch of the road.  Conspiracy theories were rife amongst the both of us, but we eventually lost the cortege of ‘jam sandwiches’, as they were once ‘affectionately’ known.

It also meant that my entries for Daily News were hampered, so only one got posted yesterday, and for this oversight I apologise.

So it is now Monday; there are Daily News stories posted, and some in hand, there is no food in the fridge, but the washing is on the line.  And more importantly, the shorts are no longer wet.