I had a surprise on Friday night. My Marigolds and I were busy washing up afterdinner when the back door opened. ‘Hmmm’,I thought. ‘Who is visiting on such a rain-infested night such as this?’ Looking up from my toil, I was greeted with the sight of Olivia entering unto the kitchen – in a style not unlike that possessed of a character from EmilyBrontё’s novel. Blown by the wind and morethan a little dampened by the precipitation that fell in a deluge outside, shestopped and said, ‘Surprise!’ I probably gave the impression of a slightly be fuddled goldfish as I stood with my mouth agape, Marigold encased hands raised in astonishment. ‘I couldn’t come for your birthday, so I have come this weekend instead,’ she explained.
An hour or so later, I was making tea (the Marigolds, by theway, were by now hanging on the crockery drainer drying. I add this fact as they featured so heavilyin my first paragraph, and whilst totally irrelevant to this one, I felt Ineeded to give them a quick mention). The kettle had just boiled and I was pouring the water into the mugs,when - again – the door swung open andin flew another vision – this one slightly more drenched and windswept. But again the figure rushed across thethreshold in true Brontё fashion (or perhaps this time more like ElizabethBennett in Pride and Prejudice when it is said of her, by Caroline Bingham: ‘Why she [Elizabeth] must be scampering aboutthe country ........Her hair so untidy, so blousy! ’ after walking in the rain from Longbourneto Netherfield. I must add here, thatalthough this was said of Elizabeth in a more than slightly sarcastic way, Imean it not as such).
Shouting some profanity against the weather (I shall not putin writing what the profanity exactly was, as - let’s face it - the words thatemanated from the lips of this visitor have to be excused under such unseasonalcircumstances) the soggy vision of Shosh tossed down some bags before rushingback out into the night. More than a fewminutes elapsed. ‘Hmmm,’ I thought (yep ‘Hmmm’ twice in one night). ‘Wasthat the shape-shifter at work again, only this time with a battery of props?’I asked Olivia, whose hurried reply was that she hoped not. After a short while, Shosh burst into thekitchen once more, and my early birthday surprise was complete. Both girls had made plans to visit thisweekend as they could not be here for my birthday on Tuesday.
However, as you can see, as much as Pru loves to have Shoshand Olivia to visit, she was a bit miffed at not being able to sprawl out onthe sofa as she usually does, hence the look on her face in these two pictures aftershe had squeezed herself between them both last night. Talk about having a mard. 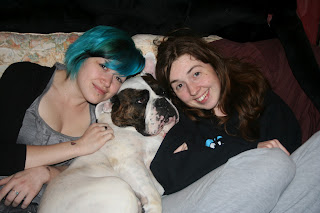 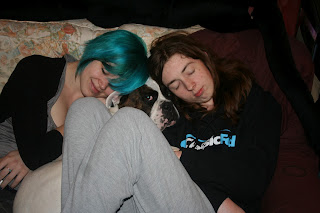 Thanks girls, for the lovely surprise and brilliant day outyesterday. I love you both and I count myself blessed to have two such wonderful daughters.
Posted by Corinna at 18:42