Of pipes and men

During my recent research on unexpected bird visitors to these shores that I wrote for the upcoming issue of Animals & Men, it reminded me of my fondness for one of this country’s birds that etched its way into my heart after reading a certain book many years ago. My daughters grew up with me oft exclaiming excitedly, “Look, there's Old Nog” when we used to amble across the Stamford Meadows, when they were children, down by the banks of the River Welland. We used to wander down to this area – usually donning our wellies as there were parts that always seemed to be boggy, even during the driest spells – to look for mushrooms (my then mother-in-law would make this variety into a delicious soup) or to just enjoy the quietness. We would often stop at the stone marker erected to signify the ford that allowed Ermine Street to continue its way northward and it was here that the Queen of the Iceni, Boudicea, crossed the river as she and her people chased the remnants of the Roman Ninth Legion in 61 AD.

Occasionally we would be lucky enough to spot one of the shyest of birds, the kingfisher and would spend ages searching the stream that ran parallel to the River Welland for fossils. It was amazing just how many you could find in the muddy bottom, along with many pieces of pottery including stems from old clay (kaolin) pipes – I remember hearing somewhere that these were described as early equivalents of cigarette butts; they were often broken off and discarded when clogged. I used to find loads of them regularly in our garden in Stamford and in my parent’s back garden in Oakham, Rutland. I was even lucky enough to find a perfectly preserved pipe bowl with about three inches of stem still attached in the River Welland near the Town Bridge on one occasion.


We would also scan the river for adult fish and the fry that used to gather in large groups in the shallows near the bank. I believe roach, chub, tench, bream and even some eels are found in the river as it passes through Stamford, although I would not know the difference if they jumped out and bit me on the nose! But there were definitely some whoppers in there sometimes. Well, to be fair, yes I would know an eel if I saw one.

However, back to the bird that opened this blog. As I was writing, before I got sidetracked badly and wandered down the dusty paths of Memory Lane, sometimes we would see this ‘grey old man of the water’ flying slowly across the sky or if we were lucky we would see him standing motionless in the shallows, with his neck hunched into his chest waiting for his next meal. And there were, as described above, quite a few delicacies to be had. Those of you who have read ‘Tarka the Otter’” will know of whom I write, but for those who have not, below is the opening line of Henry Williamson’s book. It is one of those opening lines that stays with you forever, as do those of ‘A Tale of Two Cities’, ‘Little Women’ and ‘David Copperfield’.

“Twilight over meadow and water, the eve-star shining above the hill, and Old Nog the heron crying kra-a-ark! as his slow dark wings carried him down to the estuary.” 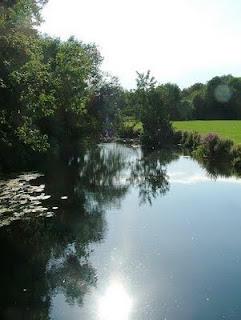