And the cow jumped over the moon

Apparently cows can jump quite high – perhaps that is why one is supposed to jump over the moon in the nursery rhyme. However, if you asked me, I would say it would be impossible for one to jump on to the roof of a house. This is exactly what happened, it seems, in Somerset when a lady of the meadow was seen standing on the roof of a residence – about six feet from the ground.
However, the owner of the property noticed the damage on her roof when she returned home and immediately thought that someone had tried to burgle her. It was not until police had made some enquiries that they discovered a sixth former had spotted the bovine and had even taken a picture of her ‘high rise’ antics. 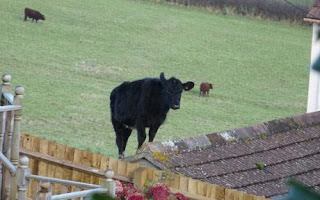 My favorite thing about this story is that an animal so overlooked and underestimated would surprise us in such a comical way.

Jumping cows is something I have not thought of in a long time, but do know they can. My fathers side of the family were hog farmers most had cows and one uncle raised dairy cows.

This article brought back some very old memories that have made me smile and my kids are asking why. Pigs can also jump at times, especially if your in the sow house with her babies and her only way in is through the top you made the mistake to slide open to see if "she" was still there.

Cows can most definitely jump fences, if given sufficient motivation. A good many years ago, my mother rented a couple of pieces of land for grazing horses on, and in summer when the grass was growing strongly, she used to get a local farmer to put a few heifers onto one of these pieces of land. Now, all but one boundary fence was stock-proof; the one dodgy section of fence adjoined another farmer's land, which usually had bullocks on it.

Now, despite being slightly lacking in the family jewels department (to make them safer to herd and grow better), bullocks do still have a faint memory of how female cows are nice to be around, especially when said females come into season.

So, as soon as a heifer or two came into season, cue an impromptu bovine showjumping demonstration and all of a sudden we had a dozen bovines on that piece of land. We weren't putting up with that, so got our farmer to shift the bullocks back. This he did, by chasing them, shouting at the top of his lungs, waving a big stick at them.

The bullocks did a circuit of the field hotly pursued by farmer, then all neatly jumped back into where they were supposed to be. A quick word with the farmer next door, on the lines of how if his cows got out again he might end up having to buy them back down at the cattle auctions, and overnight the fence was bullock-proof and about 5' high.