I was searching through my ‘art’ drawer the other day whilst seeking out my old technical drawing pens when I came across an art pad of my daughter’s. Being nosey (and she didn’t mind by the way – I checked) I flicked through it and found a few sketches she had made of her favourite subject, horses. There was also a beautiful poem; written in 1954 by Ronald Duncan, it was to be read out after the Horse of the Year show:

Where in this wide world can man find nobility without pride,
Friendship without envy,
Or beauty without vanity?
Here, where grace is served with muscle
And strength by gentleness confined
He serves without servility; he has fought without enmity.
There is nothing so powerful, nothing less violent.
There is nothing so quick, nothing more patient.
England's past has been borne on his back.
All our history is in his industry.
We are his heirs, he our inheritance.
Although poetry is - in general terms - not really my thing, I have occasionally come across some that make me laugh or make me cry. I do have some favourites; Larkin’s This be the Verse and Auden’s Stop all the Clocks to name a couple. And, like a lot of people, I used to write my own when I was younger – mostly about mystical creatures and the like or those full of teenage angst. If written now I would imagine it would be described as ‘emo’ poetry! I do admit to suffering a cringe or two of embarrassment when I read them now, but when first penned they were a record of my perceived feelings back in the 70s.
I found myself impelled to investigate poetry again this morning. As I was sitting in the office a familiar, annual sight flew overhead, this being a ‘V’ shaped formation team of geese – in fact two waves of them. Being inside I could not hear the haunting calls from the wing, but the yearly sight of these synchronised flights is, for me, one that is forever redolent of the primal call of the wild. It made me wonder as to whether anyone had written about this spectacle and I was not disappointed. The following describes it perfectly:
Something told the wild geese
It was time to go.
Though the fields lay golden
Something whispered,--"Snow."
Leaves were green and stirring,
Berries luster-glossed,
But beneath warm feathers
Something cautioned--"Frost."
All the sagging orchards
Steamed with amber spice,
But each wild breast stiffened
At remembered ice.
Something told the wild geese
It was time to fly,--
Summer sun was on their wings,
Winter in their cry.
Rachel Field(1894-1942) 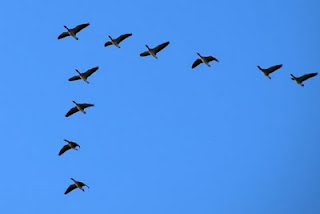 I enjoyed this Corrina. I sued to owm horses (or did they own me?).

I loved the second poem too.

BTW, I like the new look of your blog.

Like those Geese, poetry goes over the top of my head. The only one I can remember is a rude one about a man from Bengal who once did stunts in hall. I can say no more!

Horses are beautiful creatures that is for sure.

lol I can only think of one word that rhymes but I ain't saying. Jonathan keeps trying to remember the words for 'there was a young girl from Nantucket' - something to do with emptying a bucket I think ;-)