Last month on my blog I introduced you to little Zamba the white rhino born at Colchester Zoo and this entry is to say congratulations to Busch Gardens in Tampa Bay, Florida who, on Wednesday 11th November, welcomed the birth of this sweet little female white rhino. Her mother, Mlaleni, and father, Tambo, have already reared three other calves at the zoo over the years (Malaika, 2004; Dakari, 2006; Crash, 2008). 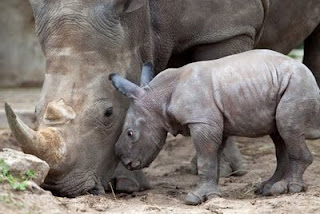 Sometimes known as the square-lipped rhinoceros, white rhinoceros is taken from the Afrikaans work describing its mouth “weit” meaning “wide”. Early English settlers in South Africa misinterpreted the “weit” for “white”. The animal’s upper lip lacks the prehensile “hook” of some of the other rhino species. It is one of the largest species of land mammal after the elephant, and this new youngster tipped the scales at an estimated 100lbs and may reach around 6,000lbs in adult life.

Busch Gardens debuted as a bird gardens in 1959, but is now Tampa Bay’s top tourist destination, combining – as they write on their website – “a world-class zoo with more than 2,500 exotic and endangered animals and more record-breaking roller coaster rides than any destination in Florida.” It participates in the American Zoological and Aquarium Association (ASA) Species Survival Plan (SSP) to ensure genetic diversification among threatened and endangered animals in zoological facilities. Busch Gardens now has a total of 9 white and 3 black rhinos.

This new calf’s father, Tambo, mother Mlelani and another female were airlifted from Kruger National park in South Africa in 2001 via the efforts of the Rhino Foundation (IRF) which is a non profit organisation dedicated to the protection of rhinos. There are, according to the IRF, just over 14,530 white rhinos remaining in the wild and fewer than 10 live in zoological facilities across North America. 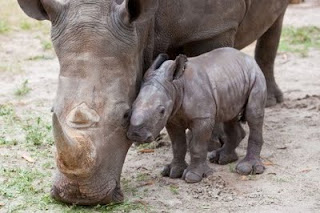 Whilst briefly looking into the species I came across an article from the Daily Telegraph dated July this year that stated: “Hundreds of white rhino from one of the world's most famous game reserves are to be herded up and sold, many of them to private hunters”

Up to 350 of the rare animals will be sold this year alone from the Kruger National Park under fundraising plans drawn up by the South African government.
Steve Smit, spokesman for Animal Rights Africa, said: "The idea of herding up animals from a major wildlife reserve and selling them to private institutions is outrageous.
"We have a duty to protect these rare animals, but the South African government is more interested in making money than conservation.
"Many of these animals will end up being bought by hunters who will simply shoot them. How does that fit with any sensible ecological planning?
"This plan totally undermines any attempts to protect wildlife and leaves the Kruger National Park looking like little more than a private game breeder."
South African National Parks bosses admitted last week they had earmarked up to 350 rhino be sold from Kruger this year to raise money for other projects.”
Is there not something fundamentally wrong here?