This is appalling, disgusting, abhorrent and any other word you can think of to describe something as grotesque as this.

According to a news item on Ananova, a clip has been posted on You Tube of a part-fried fish being eaten alive in a restaurant. The poor creature is seen to be breathing and wriggling on a plate – this Chinese so-called delicacy involves the body of the carp being cooked while its head is wrapped in a wet cloth to keep it breathing. Then they cover it in sauce and serve it on a plate. 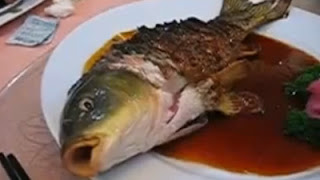 I have not watched the video, and will not watch it, but apparently diners can be heard laughing and joking as they prod the still moving fish, before picking it apart with their chopsticks

The animal rights group, PETA (People for the Ethical Treatment of Animals) has called the video disgusting and a spokesman said: “Every decent person should be shocked when anyone mocks or abuses a helpless dying animal."

The article carried on:

Stephen Fry recently singled out the Chinese culture as being the biggest threat to some endangered species.

"It is not very pleasant for us to single out a culture, but, if you care about lions and tigers and whales and sharks, it is the Far East and the way they eat, or the way they attempt to cure themselves, that seems to be the biggest threat," he said.

A spokesman at the Chinese embassy responded: "I don't think it is fair to accuse other cultures of having certain negative habits and traditions.

"We have our traditions, as the Spanish have bullfighting, and you, until recently, had foxhunting. We did not criticise you or the Spanish for this. Tiger bones for traditional medicine are now banned, to the suffering of the Chinese industry."

Whilst the cruelty of this "dish" is not in doubt, I personally would not look to PETA as a shining light of reason in the world of animal rights. Records show that PETA animal shelters routinely kill over 97% of all animals delivered to them, to the extent that the Commonwealth of Virginia has been formally petitioned by The Center for Consumer Freedom to formally change the status of a PETA shelter in that state from "Humane Society" to "Slaughterhouse".

No, PETA is generally not a society which cares for animals so much as one which has an ulterior animal rights agenda, and one which is picking up on this horror story as a way of promoting its own agenda. I would therefore caution against believing everything PETA says, regardless of content.

Yes, they euthanize animals, maybe Drs like yourself should go to every shelter and take all the animals. Then Peta wouldnt have to euthanize. In many states where there are no kills shelters, even those are loosing accreditation, because of all the animals being surrendered, and have to be put down, as there are no resources.
as for credibility you have none, sorry. Complaining about Peta and there track record is laughable since they have shown abuses. But I guess you are ok with puppy mills, and violence against animals.

There is a fundamental difference between an organisation which kills pretty much every single animal it gets its hands on, and one which tries to re-home the animals it takes in and only kills the old, the sick and the completely non re-homeable. PETA doesn't even try to preserve life; if you give anything living to a PETA shelter they'll kill it for you, no questions asked (or no questions answered, anyway).

It isn't like these guys don't have the money to at least try; they're very, very rich and have a large turnover but all their turnover goes towards trying to pull more money in, to promote an extreme animal rights view (no pet animals, no food livestock, no pesticeides in farming etc.) and last but not least to pay their executives extremely handsome salaries.

A proportion of their throughput could usefully be used to run local education programmes and animal sterilisation programmes. People like owning pets; always have, probably always will. Merely killing everything handed in doesn't actually solve the problem of overproduction via puppy mills and irresponsible breeding; neutering all the animals to be rehomed at least mitigates the irresponsible breeding problem whilst letting people own pets.