Spots before your eyes

There is a cute scene in 101 Dalmatians when all the pups are sitting around the TV and one (Rolly I believe) turns round to Perdita and says 'I'm hungry, mother. I could eat a whole elephant'.

Not so cute, however, was the story recently of an 8-year-old Dalmatian called Barney. If you remember that the average weight for one of these dogs is around 55lb (3st 13lbs) it will shock you to learn that poor Barney was morbidly obese, weighing in at a massive 11st !

When inspectors from the RSCPA raided his owner's home back in June they found Barney's spots had swollen into great blotches and could barely move with so much flab. He had been overfed on a diet of chocolate and crisps and moving left him out of breath almost straight away. As for running or jumping in the air - an impossibility. 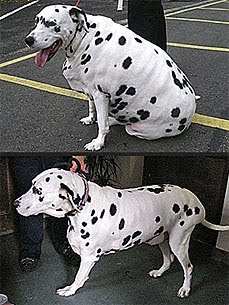 His owner has been banned for keeping dogs for ten years and was ordered to complete 200 hours of unpaid work after admitting cruetly, and Barney is now sporting a new slimline figure of around 4st, thanks to regular exercise and a healthy new diet.
The PDSA, earlier this year, claimed that 35 per cent of dogs in Britain were overweight which increases the risk of arthritis, diabetes and an early death.

Sorry Biggles, in answer to Jon's question today as to whether I could cook you a fried breakfast too....the answer has to be a resounding no! (It would have been anyway)

I can't believe a Dalmatian would ever get that fat. The ones I've known have been so full of energy that could eat all day and never gain a pound.

But I've never fed dogs chocolate for a very simple reason. I don't like them to eat poison. Some dogs can handle some milk chocolate, but it's really not a good thing to feed them!

I was expecting to see an obese Labrador, beagle, or corgi, but this is the first photo of a fat Dalmatian I've ever seen.

They are normally so full of energy that the average person can't keep them under control, which is one reason why they wind up at rescue whenever film featuring these dogs is released. People buy them thinking they can keep them in a small house with a modest yard, when they really need lots and lots exercise.

Barney is coming to live with me, my wife and Tess (our other rescued Dalmation).

Hopefully he'll be with us for Xmas.

Retrieverman is right - they are very active. However, I have never had a dog that will eat absolutely everything! Anyone with a Dalmation needs to be very careful with diet and committed to long walks / plenty of exercise.

Rest assured Barney's twilight years will be good ones.

That is great news Mike and thanks for leaving your message. I hope Barney is with you by Christmas and that he settles down with you. It would be great to hear how he gets on in his new home so please don't hesitate to send us updates :)