Catch up of a snowy week in Woolsery Part 1

Excuse my absence from blog-land this past week. Shosh and Gav have been on a week’s holiday with us and I have been out and about and doing mother ‘stuff’. We have been on long walks with Biggles in the snow and as you will see from Jon’s blogs, we have come across some odd things whilst taking our constitutionals in the woods in the area near us known as Powler’s Piece. 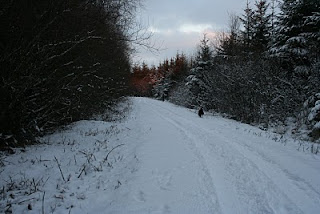 The same day that we came across the odd snow-person we misjudged our return stroll to the car and it became something of a speed walk as the sun was setting. It seemed to drop like a stone rather than descend serenely, but it did make for a great picture as the sky took on a beautiful orange glow merged with the dark ominous looking clouds. The snow-person (complete with the yellow stains left by Biggles earlier) soon appeared in front of us and we knew we would make it back to the car without my having to hold on to Shosh and Gav while wailing that we were done for. The snow-person got another dose of Biggles’ attention as he ambled passed it prompting the query of why he was so interested in it. My macabre sense of humour suggested that it probably disguised a body. 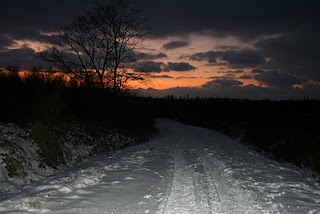 Forests can be eerie at the best of times, but at dusk when the rooks are returning to their roosts it can become very creepy, especially when they all seem to spook and flap overhead as if escaping from some evil afoot below in the dense weaving of boughs. But then that is just my wild imagination getting the best of me, plus a dose of watching too many late night horror films in my youth when in the house on my own and with the lights switched off. There is something about watching old black and white horror films whilst curled up on the sofa that cannot be matched these days.

Then, to make sure no nastiness was lurking, there was the obligatory check under all the beds, plus inside all the wardrobes – I always opened the doors with a flourish – before I retired to my own bedroom. It was the insatiable desire to pull open the curtains that were pulled across the French windows that overlooked the back garden though that were the most compelling – there was always a burning need to do so, accompanied by the obvious tingle up the spine at the thought of some weird contorted face staring back at me. However, this thought never failed to provoke the action and I would always gingerly peek with one eye through a crack in the curtains before quickly drawing them apart.

However, that was years ago and bringing it up here is a symptom of what my mother calls a grasshopper mind. Most of the family seem to possess it.

On Friday night Olivia and Ivan came across from Exeter for a family get together and for the girls to give each other their Christmas presents. The sweet lads and lasses presented Jon and me with a ‘stocking’ each too. Jon became a tad emotional that he had a stocking and I had a tear in my eye when Shosh and Olivia presented me with a framed montage of photos of themselves as babies/children. It will be put in a place where I can see it daily and have a silent ‘aww’ to myself. My girls have grown into such loving, thoughtful young ladies….their respective blokes are pretty cool too.
Posted by Corinna at 13:48