Catch up of a snowy week in Woolsery Part 2

Whilst Olivia and Ivan went off to Barnstaple on Saturday to do some shopping for the chinchilla, which they were taking back with them, Shosh, Gav, Biggles and I went off for our tramp through the woods. 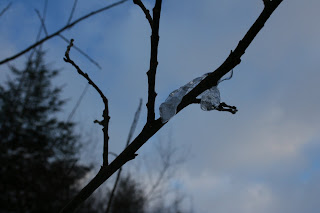 We were trudging our way back towards the car when, for the second time since having my camera, I discovered that I had lost my lens cap. The first time I ‘lost’ it (the cap that is, not my marbles – they spilled out of the marble bag and rolled under dense shrubbery a long time ago) was at Drusilla’s Park in East Sussex in 2007. On that occasion I had to retrace my steps across the whole zoo whilst Jon waited for me under cover as it had begun to rain. I returned some while later after an unsuccessful mission only to find the annoying little circle of plastic in one of my pockets (and yes I had already checked upon my person in the first instance, and on several other occasions whilst wandering around looking for the blasted thing).

Out in the cold, wintry wilds of Powler’s Piece, I had checked my pockets with numbed fingers to no avail. Around this time I had also decided that enough was enough and that I would have to answer the call of dear Mother Nature even though she had picked the worst possible time to send out her message of importance. So leaving Shosh and Gav to retrace our steps from whence we had plodded (plus Biggles – he would have been too much to handle in an already delicate situation) I was left to bound over a frozen drainage ditch from the ride into the forest beyond. This was a tricky business for several reasons, not the least being that the snow covered what could be dodgy landing ground on the other side and it would not be until my right foot made contact that I would find out whether or not it was a good place to make that leap of faith. Luckily it was and I scuttled off into the snow-covered boughs of pine forest with urgency in my step, and for the sake of propriety I shall leave the story of Mother Nature’s intervention there.

My point to all this really is to wonder why all cameras can’t have their lens caps on a piece of thin knicker-type elastic so stupid people like me who suffer from severe senior moments can avoid such occurrences when out and about, getting up close and personal with the wonderful world around us. It would also be fun to play with in one of those boring moments whilst waiting for prospective subject matter to move closer into view for example. But alas, on my camera it is a separate entity and I am surprised that it has actually stayed in my possession for as long as it has. 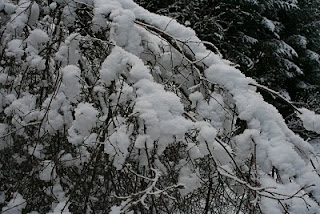 After leaping back across the ditch I was relieved (in more ways than one) that there was no-one there to see me as my stumbling around would have been embarrassing for me, yet highly amusing for them. I lost my footing slightly which led me to have to throw out my arms to steady myself as I veered to the left and nearly tripped as I got my right foot caught in some undergrowth. I felt a bit like the hippo I saw once on TV that had been shot with a tranquiliser dart. By the time I met the others coming back my composure had returned, my hat had been repositioned correctly and any wisps of wayward hair had been tucked behind my ear to avoid me looking like "Bertha Rochester" after an afternoon out on an outward bound course. Thankfully, good ol’ Gav had spotted and retrieved the missing lens cap so all was well.

So, it was back home to hot tea and cake and unfortunately the news that the Met Office had issued a bad weather warning for snow in the early hours of Sunday morning.

It had been intended that Olivia and Ivan would stay until Sunday but because of this warning – and the fact that it was imperative that they got back to Exeter for work on Monday morning – it was thought it prudent that they returned that night after dinner instead. Dinner was late – as ever – and by the time they left it was getting on a bit, but they got back home safe and sound.

As a final word (or two) I know I posted a video of Dean Martin singing Let it Snow a few days before Christmas, but this was not a request, Dean, thanks very much.
Posted by Corinna at 14:03