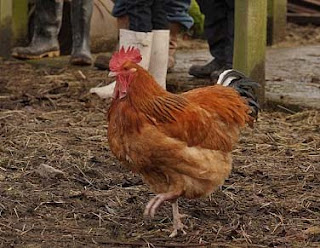 It would appear that a certain cockerel called Colin has been doing what comes naturally and upsetting the neighbours. This blatant audacity on his part could well mean that he will have to be destroyed. The fact that a wild peacock also does what comes naturally and doesn’t seem to attract the same response from the neighbours does seem slightly peculiar, considering that the weird mewing call of a peacock can be somewhat more penetrating than a mere cockerel.

However, a family in Hampshire have been served with a noise abatement order by the East Hampshire District Council after neighbours complained about Colin. Well one set of neighbours it would seem; ones that moved in three years ago. More to the point, neighbours who voluntarily moved into their £1 million 8-bedroomed house in the countryside where such sounds as cockerels crowing is to be somewhat expected just as the bleating of sheep, the mooing of cows and the odd whinny and nicker of a horse or pony.

Nevertheless, the neighbours called in the council who, after utilising their recording and noise measuring devices, found Colin guilty of regularly crowing before 6 am .

Let us just hope that if Colin does have to leave (he only arrived there last September) it will be to a new home rather than having to be destroyed.

People who move into an area should have no right to complain about things that were already going on before they moved in.
This is so much like the cases where idiots have moved in near an operational airfield then complain about aircraft noise. Or they buy a house in a village then moan about those damn noisy church bells ringing every Sunday.