We all awoke this morning to a find a fairly thick blanket of snow covering the garden and large flakes still tumbling silently down.  You always know when it has snowed overnight as the world around becomes silent. A childish glee awakens inside you at the sight of the snow mingled in with the slight panic of whether you have enough milk etc to last in case you get snowed in. 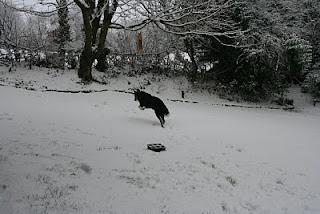 Biggles, however, has no such concerns.  Whereas last year he paid not too much attention to the snow, this year he loves it and has been out and about bounding around thoroughly enjoying himself. 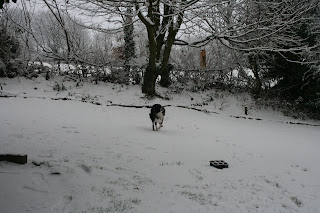 Even Jon had a spurt of snowy jollity with a snowball: 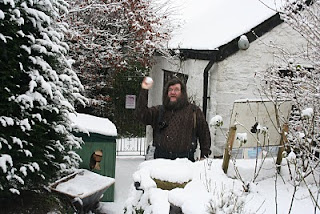 Yesterday Shosh and Gav came down for a week's visit and a late Christmas with us.  They had had snow in Stoke on Saturday and Shosh had spent just over an hour getting home from work on a journey that would normally take 10 minutes. Yesterday morning we discovered a recurrence of a leaky pipe in our "utility" area which, despite Graham's gallant efforts, decided it would resist all efforts to be tamed and reared its ugly head again last night.  Hence this morning it had been planned for him to go into Bideford to get some plumbing bits to try and sort it out.  So the snow this morning threw a bit of an icy spanner in the works.  However, off he went and Shosh and Gav bravely volunteered to ride shotgun with him.

Is Biggles named for flying ace in the books by Captain W.E. Johns?