Yes it is cutie time again. Little Oliver the koala was born last April at the Riverbanks Zoo in South Carolina to Lottie and Jimmy, but spent his first few months in his mother's pouch. He has now become too big to stay there, but still makes sure he stays close by tucking himself under her stomach or clinging to her back. 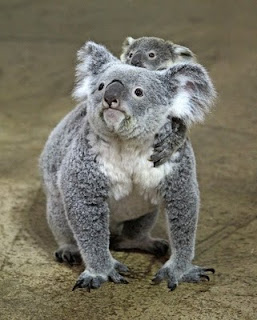 Koalas look like the cuddliest teddy bears of all time, but are in fact marsupials. When born the youngster, or joey as it is called, is about the size of a jelly bean and travels through the birth canal to its mother's pouch where it is nursed for several months. As it grows it may stick out an arm or a leg, or even its head, for short periods of time before it is confident enough to emerge into the outside world completely. It was not until Oliver was around 7 months old that keepers caught their first glimpse of him.
When he reaches 12 months he will be considered mature and will be weaned from his mother, and, in due course, will be sent to another zoo under the breeding recommendations from the SSP (Species Survival Programme). 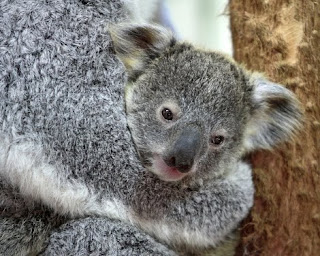