A cockerel called Gianni has swapped his sex after a fox raid that killed all his hens. His owners say that Gianni was definitely a red-blooded rooster until the raid on the farm in Tuscany, when he started to lay eggs and tried to hatch them.

UN scientists are going to study Gianni’s DNA to see if they can establish why he has changed sex. “ It may be a primitive species survival gene. With all the females gone he could only ensure the future of his line by becoming female,” said one expert.

I had heard of chickens changing from female to male before and back in April 2006 the Mail Online reported on an egg-laying hen turning into a cockerel. She had spent 8 months laying dozens of eggs and then crowed like a rooster one morning. She developed a scarlet comb, grew wattles under her chin and tufty tail feathers over the next few weeks.

Her owner had kept chickens for 10 years, but had never heard of this happening before, but animal experts said that the sex change was a 1-in-a-10,000 rarity and happens when a damaged ovary causes the hen’s testosterone levels to soar, turning the remaining ovary into a testicle.

There are other tales of hens turning into cockerels, but it would seem that a rooster changing into a hen is even rarer than 1-in-a-10,000. It will be interesting to see what results the scientists come up with. 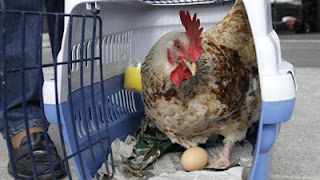