Pink to make the boys wink

I saw something yesterday that made me wince. I am not sure whether it was a wince of disgust, a wince of anger or merely a wince of embarrassment for the young lass concerned. It had been a lovely balmy spring day and many people were going about their business being able to do so without the need for warm outer wear so it was not surprising to spot naked arms and legs for one of the first times this year. However, whilst in the car at the garage as Graham was filling up with petrol a young girl walked on to the forecourt to purchase something from the garage shop. Her outfit was – at first – non-descript, albeit being a baby pink tracksuit that didn’t quite meet in the middle, revealing a bare midriff (which again is nothing new these days). However, it was upon her exit from the shop that I do admit to sighing with despair. The expression ‘muffin top’ is self-explanatory (I possess more in the line of too small a cake tin in which a large Victoria sponge has oozed over the sides) but it was the slogan splashed across her rear that was the icing on that muffin that made me cringe.

I am not sure how old she was – these days it is very difficult to pigeon hole youngsters into age groups – but if I was pressed I would say somewhere in the 14/15 year bracket. I am not convinced that the word JUICY emblazoned in large letters across her bum was really apt though. Although in saying that, whilst my eldest daughter would probably agree with me, my youngest would probably say I was behind the times and over-reacting.

But to me there is something quite revolting and disturbing about a young girl of that approximate age wandering around in a baby pink tracksuit with such a word placed in such a position. Or am I really just getting old and believing too much in the age of innocence? Does that not exist anymore in the 21st Century? 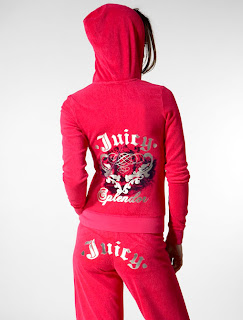 Mummeh, it's a brand name called Juicy Couture :) Hence the 'Juicy' written everywhere.. a bit like when the brand 'Bench' became popular and everyone had 'Bench' written on their arses.. raising a few eyebrows obviously ;P

Yes, but why written across the derrier? It could be written down the legs ...... I am trying to think of a link for bench but am struggling - or am I missing something really obvious lol?