A night on Bodmin Moor

Some stories tell that it was on April 14th 1844 that Charlotte Dymond and her boyfriend Matthew Weeks went out for a walk across Bodmin Moor, Cornwall. Some stories tell that that was the day her body was found. I am not too sure which is the correct version, but what is clear, however, is that the walk was the last time anyone saw her alive, for a few days later her body was found in a stream near Roughtor Ford, her throat having been cut from ear to ear. Matthew had returned to the farm alone and had said that he had left Charlotte at Higher Down Gate and had not gone further with her out on to the moor. When her body was found Matthew became prime suspect and fled to Plymouth. When he was located, he was arrested for her murder, found guilty and hanged in Bodmin Gaol at noon on 12th August 1844 for the crime. The story goes that Charlotte and he had an argument and that he had lost his temper and killed her, before returning to the farm alone. Since then, though, it has been suggested that he may well have been innocent of her murder and that another jealous lover was guilty of the crime. We will never know.

Charlotte was an 18 year old maidservant who was employed at Penhale Farm on the edge of the moor and Matthew, who was 22 and crippled, was a farmhand on the same farm. Charlotte is buried in nearby St David’s Churchyard, Davidstow and Matthew’s body was laid to rest in the gaol’s coal yard. 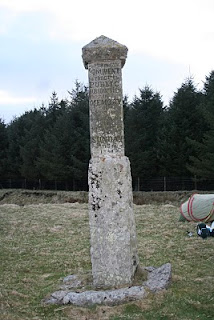 There is a monument to Charlotte standing near where she was murdered – it has been relocated slightly due to erosion of the banks, but there have been reports of Charlotte’s ghost - clad in a gown, a red shawl and a silk bonnet - being sighted on the anniversary of her death. So on Wednesday this week, the 14th April, I went to Bodmin Moor with our friends Jools, Dougie and Kai from PPI (Parkin’s Paranormal Investigations) to pay our respects and see if anything occurred. 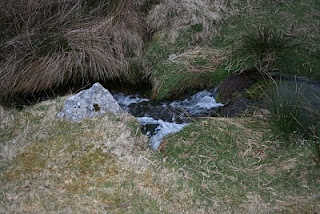 I was to meet them near the Dairy Crest factory at Davidstow and after a wrong turn and a subsequent ten mile trip round in a circle down one of the narrowest roads I have come across, I eventually caught up with them; in the end down to the wonders of the trusty mobile phone. However, during my lost ten miles I did get to have a small conversation with a herd of cows and their calves who eyed me with great consternation and suspicion, and which seemed glad when I drove off and left them to their ruminating.

Armed with backpack, cameras, coffee flask and sandwiches we reached the monument at about 7.30 pm after traversing some rather dodgy boggy ground and streams. It had been a rather amusing trip from the car park with slips, trips and splashes, but the scenery around us was absolutely stunning – that is when we could look at it, in between navigating the rather uneven ground. Moorland is my favourite landscape and it was the first time I had seen the wild side of Bodmin in all its natural glory. It was Jools’ 8th, Dougie’s 7th and Kai’s third annual visit I think, if I remember correctly, but of course it was my first and I was excited and slightly apprehensive as well. I don’t make the habit of sitting out on the moors in the middle of a cold night when most are snuggled between warm duvets. However, after this first foray I am now bitten by the bug and hope to join the others on some more similar investigations.

As darkness fell the sky revealed an unbroken scene of constellations – there were no street lights to mar the brightness and no clouds to cover the spectacle. The breeze picked up and blew its way freely across the moorland and I was glad that I had donned polo neck sweater and a few other outer garments as well as my hat, scarf and gloves. From the sheer wildness you can understand why Charlotte’s body had lain undiscovered for a couple of days – there is nothing there even now, other than a few sheep and ponies. The bleakness is astounding and beautiful.

Apart from reported sightings of a ghostly apparition dressed as Charlotte had been on the day she was last seen, there have also been reports of the scent of perfume around the monument, but unfortunately on Wednesday there was nothing for us.

Eventually a decision had to be reached and we decided to leave the monument and make our way back to the car park in the darkness, save for a couple of torches. The return trip was even more hilarious than the arrival as the light from the torches only broke up the complete blackness for a few feet. It is surprising how disoriented you become when there is no light and if anyone was watching they would have spent a happy quarter of an hour watching us make our way gingerly over the tufts of grass and desperately attempting to avoid a late night dip in what was probably rather cold water. I freely admit that my sense of direction is nigh on zero and on a couple of occasions I found myself veering off in completely the wrong direction.

The only thing then was for me to find my way back to the A39 – a task which was aided by the others with grateful thanks– and with a toot and a wave we headed off in opposite directions towards our relative homes.

To some, it may have been a rather odd way to spend an evening, but to me and the others, it was a great night spent with friends and we had a lovely time even if that does sound rather a weird way of putting it considering we spent a large amount of it in the darkness near the spot of a murder that was so gruesome that it even reached the pages of The Times.

The true story of Charlotte Dymond and her murder will never be known, but if you would like to read some more about it then the following is a good place to start:

http://www.lindastratmann.com/CharlotteDymond.html
Posted by Corinna at 16:56