When the cat's away

Jon and Graham went off to Berkshire yesterday (Thursday) for Jon to give his talk at Reading Library – they were picking up Richard on the way – and left the house at midday. Oll was busy doing scanning upstairs so it meant that I had downstairs all to myself. This was paradise. Then Oll went out to record an interview and I was left completely without human company for four hours! What bliss. The sun was shining and whilst it was very tempting to down tools and go and sit in the garden with a good book and a pot of tea, I was a good girl and pottered around the house doing chores uninterrupted. I tidied my ‘desk’, cleaned up the kitchen and even managed to tidy up in the bedroom and actually put the laundry away. What delights I can get up to when left on my tod. And at midnight it was still tidy - usually spaces that suddenly become empty on tables etc., almost immediately disappear again behind my back if there are others in the house when I am cleaning up. Point in case - Jon comes home and immediately plonks a Morrisons supermarket receipt on a spare area of my 'desk'. Not for long though, for I returned it to him forthwith and scolded him for daring to do so.

Spider, the cat, joined in the chores by knocking the telephone off the dresser in the kitchen - I think he was trying to point out that it was in his way as his favourite loitering place is right on the corner, presumably so that he can take a casual swipe at the dog's head as he wanders passed. 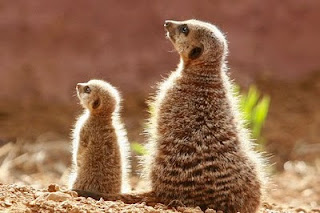 'ere mum - what's that up there?
PS: I am sure there is joke opportunity somewhere about Spider being a mere cat but I am darned if I can think of one right now.
Posted by Corinna at 00:38