A bird in the tin

I didn’t realise you could still buy Kiwi shoe polish. It is one of those items that were ever present in our cupboard at home when I was little. And when my mum and dad were in charge of such things, my school shoes always received a regular brushing with the gorgeous smelling paste. Perhaps it is telling that as I got older, and was in charge of such things myself, my shoes didn’t get quite so much attention as they used to and the tin was less used, so no wonder then that the little round tin had escaped my memory until I read something today that urged me to look it up.

It is not surprising perhaps that back in those hazy days of childhood that I would not have questioned its trade name – primary school children are rarely bothered with such things other than maybe asking such questions as what is that picture on the tin? However,being interested in the world of nature from a fairly young age the plump little bird after which it is named may well have been fairly familiar to me - I still have my ‘leaving’ book signed by my headmistress in 1967, which we all received upon moving from primary to secondary education , in my possession. We could choose what book we would like and I chose The Wonder Book of Animals, on page 95 of which is a drawing of a kiwi. But with no internet in those days I would not have been able to find out exactly why a shoe polish so common in our shops would have been named after a native bird of New Zealand unless I trawled through a lot of books in the local library. Today, though, all was revealed when I discovered that it was first made in Australia in 1906 and was, in fact, named Kiwi as the wife of the chap who developed it was from New Zealand. The reason it became popular overseas was due, apparently, to the British and American armies adopting it in the First World War.

I like to learn something new every day and the missing link between shoe polish and a plump bird from New Zealand is a welcome addition to the list.

However, what has this to do with anything? Basically, I was looking at a selection of new additions to zoos around the world and came across the plump little character below: 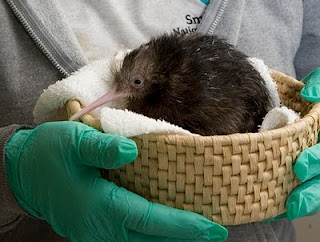 There are five species of kiwi in New Zealand and the brown kiwi is not only named as their national bird, but is also the only one to be seen outside of its native country. The Smithsonian’s National Zoo in Washington DC is one of only four zoos outside of New Zealand to successfully breed them. The egg, belonging to the Chicago’s Brookfield Zoo, was laid in January, and at the end of last month the chick hatched at the National which is only the fourth time in the zoo’s 121 year-old history that this has been achieved. The sex of the chick is not normally known until it is two years old, but it is hoped that DNA samples swabbed from the inside of the shell and from the chick’s beak will allow geneticists to decipher its sex in the coming weeks.

The bird is classified as endangered by the International Union for the Conservation of Nature and the Maori consider it as sacred and it plays a large part in their mythology. The kiwi mates for life and the egg is looked after by the male until it hatches, when it receives no further parental care. Fully feathered when born, they have all necessary skills to survive. They are ground-dwelling, nocturnal, flightless birds that have a keen sense of smell. 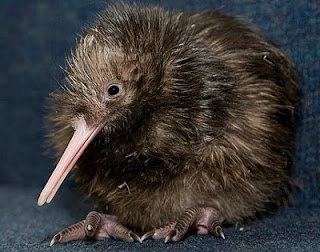 You can check out more about the care and hatching of the latest chick at the Smithsonian’s National Zoo at: http://nationalzoo.si.edu/Animals/Birds/Kiwi/
Posted by Corinna at 13:13