Being a domestic engineer (a profession suggested to me by the man at immigration in Texas to replace the age-old expression "housewife") seems to infer that several everyday tasks may require the need of a hard hat or overalls.

In the case of the poor woman in Victoria, Australia who went out to collect her washing from the line, one or both of these may well have been ideal apparel. She discovered, to her horror, that a swarm of around 20,000 bees had attached themselves to some of her more colourful garments and presumably clung on to the fabric - and themselves - in a cacophony of buzzing and humming in defiance of her laundry day antics.

She telephoned a local bee keeper to come along and clear the offending creatures and her garden became a hive of activity whilst he dealt with the little darlings. He explained that “bees swarm in the spring when their hives become overcrowded, forcing the queen bee to head out with some of her workers. The bees then cluster nearby while scouts head out to find suitable locations for a new hive.”

Bees on their own are sweet little things, but get a group of them together and they instantly become akin to a crowd of football hooligans who cling together in the terraces and threaten all those around purely with the sight of their numbers and noisy chanting. There may be safety in numbers for those concerned, but to the outsider those numbers are terrifying. 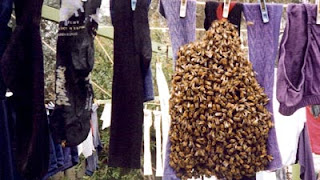