Some stripes for Shosh 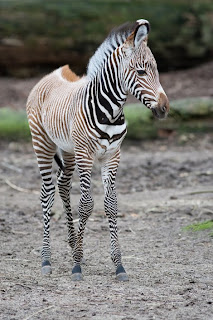 Shosh loves zebras and every birthday and Christmas usually consists of something 'zebra' for her collection (I even managed a packet of zebra cakes (which we brought all the way back from a Walmart in Texas) for her birthday this year, which I was pretty chuffed about) so when I saw this photo of a Grevy's zebra foal born around a week ago at Amersoort Zoo in The Netherlands, I couldn't resist posting it on my blog.
Grevy's zebra (Equus grevyi) is not only the largest zebra but also the largest wild equine and was named after Jules Grevy, a French president, who was given one in the 1880s by the government of Abysinnia. It is also the only living species of the subgenus Dolichohippus - other zebras belonging to Hippotigris. It is taller, has narrower stripes and larger ears than other zebras and is considered endangered.
If you would like to learn a bit more about Grevy's, here is a link for you:
http://www.grevyszebratrust.org/index.html
Posted by Corinna at 13:09